Does the Latest ‘Prometheus’ Stealth Infomercial Offer Hints About the Upcoming Movie? 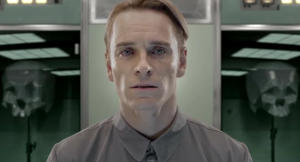 A few weeks ago, 20th Century Fox created a TED presentation that turned out to be a sly form of advertising for the upcoming film, Prometheus. Now they’ve released another video in the form of an infomercial for their robot, David.

David, played to creepy perfection by Michael Fassbender, discusses the inner life of a robot, as well as the benefits that one would bring to your organization.

Benefits such as, “I can carry out directives that my human counterparts might find distressing. Or unethical.”

I’m sorry, can you repeat that? David, who says he understands human emotions, is willing to perform unethical tasks, just because he’s told to do so? (As we know, Ash, the robot from Alien, followed orders without a blink of his creepy android eyes.)

I think this infomercial is telling us that David will indeed be carrying out distressing directives. But I’m not sure who’s directives he’ll be following.