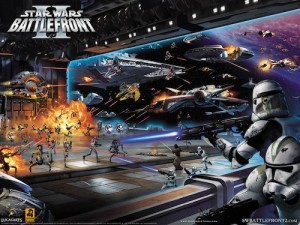 If fans of the now-defunct games company LucasArts were wondering what would happen to Star Wars-related games, wonder no more: Today, Disney, which purchased the kit and caboodle of George Lucas’ creative output back on October 30, 2012, has announced a partnership with EA, giving the games company the right to develop and publish games in the Star Wars universe.

According to an EA press release,

Under the agreement, EA will develop and publish new Star Wars titles for a core gaming audience, spanning all interactive platforms and the most popular game genres.

This is an exclusive contract, so no other videogames company can put its eggs in the Star Wars basket.

Disney, however, will retain its rights to develop new games for the “mobile, social, tablet, and online” market, in other words, casual games on Facebook and games for iOS and Android. It’s not clear if this marks the end of hugely popular themed games with other companies like Angry Birds: Star Wars (Rovio) or the LEGO Star Wars (Traveller’s Tales) series (the most recent of which, LEGO Star Wars: Yoda Chronicles, was released two days ago, May 4).

Casual games are typically quicker and cheaper to develop than PC and console games, and although social media games have recently lost a whopping 10 million gamers (or roughly 5%), the Disney-owned Marvel title Marvel: Avengers Alliance, “has done quite well,” on Facebook, according to Scott Steinberg, videogame consultant for TechSavvy Global. The fact that Disney has retained the rights to develop social games signals that the media giant will likely bring their same skills—M:AA was voted the Best Social Game at the Video Game Awards in 2012—to the Star Wars universe.

EA’s ongoing reputation issues with fans aside (the Redwood City-based publisher of Sim City 5 was recently voted “Worst Company in America” for the second year running), the games publisher obviously has Disney’s confidence. If EA produce games as true to the brand as Knights of the Old Republic (BioWare), The Force Unleashed (LucasArts), and games set in the galaxy far, far away—without always-on DRM, of course—this may help bolster its reputation among the geekerati.

But even though EA owns BioWare, which should make Star Wars-based EA games a slam-dunk down the exhaust port, fans are likely to be skeptical until the reviews are in, as most of BioWare’s original employees are no longer working there.

“will produce new games, joining the BioWare team which continues to develop for the Star Wars franchise. The new experiences we create may borrow from films, but the games will be entirely original with all new stories and gameplay.”

New Star Wars games? Yes, please. But sadly the press release has no mention of the late, lamented Star Wars 1313 and Battlefront III, the AWOL-since-2007 game that had gameplay footage surface this week.

Even though Battlefront II was released eight years ago, Valve actually ran out of keys for the 2005 game in the Star Wars franchise sale on Steam this weekend. With this in mind, this should prompt Disney and EA executives who are looking for ways to maximize their new acquisition’s potential to search their feelings.