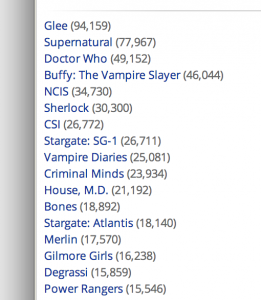 Reading and writing fan fiction is a pastime I’ve enjoyed for years, and I’m not the only one: Fanfiction.net, a clearinghouse of fan fiction from across dozens of television shows, movies, and books, has millions of stories in its ever-growing repository. Once considered the domain of science fiction fans (although much older than that) now spread over non-genre television shows such as House and Gilmore Girls, fanfic has long been considered a copyright violation lawsuit in the making. Now Amazon is giving fan fiction the legitimacy it needs and deserves. With caveats.

According to an Amazon press release,

Today, Amazon Publishing announces Kindle Worlds, the first commercial publishing platform that will enable any writer to create fan fiction based on a range of original stories and characters and earn royalties for doing so…. Through these licenses, Kindle Worlds will allow any writer to publish authorized stories inspired by these popular Worlds and make them available for readers to purchase in the Kindle Store.

Currently, only three television shows are available for the Kindle Worlds treatment, Gossip Girl, Pretty Little Liars or The Vampire Diaries–all of whom began as novel series’—although Amazon plans to include a wider range of properties in the future.

Some writers starting out in their careers will see this as an opportunity. After all, when you publish in someone else’s universe, a lot of the “heavy lifting” of writing (establishing the characters and the world itself) has been done for you. Also, fans of these shows have already written the stories and posted them to fanfiction.net (where you can find  4,000 Pretty Little Liars stories, 10,000 Gossip Girl stories, and 25,000 Vampire Diaries stories), so publishing on Kindle Worlds is no extra work but 35% of royalties in their pockets.

Others see this as cause for concern. Unlike the “real” world of fanfiction, where imaginations are completely unfettered, Kindle Worlds has limits, such as no cross-overs…and no pornography. And yes, quite a few fan fiction stories are pornographic.

Even more others still will be shy of Kindle World‘s contract.

“Amazon Publishing will acquire all rights to your new stories, including global publication rights, for the term of copyright… When you submit your story in a World, you are granting Amazon Publishing an exclusive license to the story and all the original elements you include in that story.”

Many authors of original works would find that contract limiting. Author and founder of StrangeHorizons.com, Mary Anne Mohanraj says that this is “essentially a work-for-hire contract offer; it’s up to the writer whether they want to sign away so many rights.”

Work-for-hire has its own particular problems; one example is that if your work is wildly successful, the author is still bound to his/her original fee. However, Mohanraj, and many other writers, agree: “For a sufficiently large payment, I might sign such a contract.”

But authors such as John Scalzi and Jim C. Hines have pointed out problems with Kindle World’s contract. One  particularly unappealing clause:

… [The fan fiction writer] will own the copyright to the original, copyrightable elements (such as characters, scenes, and events) that you create and include in your work, and the World Licensor will retain the copyright to all the original elements of the World…. We will allow Kindle Worlds authors to build on each other’s ideas and elements.

In other words, Kindle Worlds will let writers create new material for their universe—which is kind of the point of fan fiction. But the original authors have no say about the storylines and the quality of the works that Kindle World publishes. This makes them justifiably uncomfortable.

However, the author is protected in other ways. The contract states “We will also give the World Licensor [the content creator/author] a license to use your new elements and incorporate them into other works without further compensation to you.”

In other words, if you, the fan fiction writer, create a wonderful character with staying power, the original author can use it, and you get nothing. It’s enough to inspire some writers to create their own books and keep all of their profit for themselves—which is yet another point of fan fiction. Quite a few authors began their careers as writers who wrote for love before they wrote for money.

I think this is a wonderful turn of events, for both Amazon and for readers. The previously legitimized Fifty Shades of Grey, originally written as a fan fiction story of characters in the Twilight series, sold over 70 million copies, proving that there is a ready market for this material. (Of course, Fifty Shades, with its sadomasochistic content, would be exempt from Kindle Worlds’ terms and conditions.)

I’m concerned about the quality of Kindle World’s content. In traditional publishing, a manuscript has to be approved by an editorial staff with exacting standards. There’s nothing in Amazon’s press release—and a query to Amazon about this has currently gone unanswered—that suggests an editorial process. Fan fiction is wonderfully fun if it’s free, but if I’m paying for content, I would want something worth paying for.

And if it’s not, there’s always fanfiction.net.