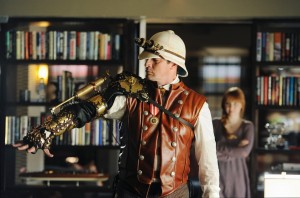 Steampunk, a celebration of Victorian fashion and technology, started off as a subgenre of science fiction writing and has evolved into a fashion movement for people who like corsetry, top hats, and pocket watches. (And who doesn’t?) It’s poised to break through into a full-fledged fashion trend in 2013. But I’m not just saying it because I like it. Actually, I’m quoting…IBM, which calls steampunk a “New Retail Trend in the Making.”

According to an IBM press release, “’Steampunk,’ a sub-genre inspired by the clothing, technology and social mores of Victorian society, will be a major trend to bubble up, and take hold, of the retail industry. Major fashion labels, accessories providers and jewelry makers are expected to integrate a steampunk aesthetic into their designs in the coming year…

“During the next two years, [emphasis mine] IBM predicts that steampunk will shift from low production, high cost “craft” manufacturing to mass production.”

So how did IBM eschew business machines to become a player in the world of fashion trend forecasting? It didn’t. IBM has made this prediction “[b]ased on an analysis of more than a half million public posts on message boards, blogs, social media sites and news sources.” This project–one which tracks online data–is part of IBM’s social sentiment index that reveals public opinion and trends.

Now thanks to IBM, we can reveal in steampunk tidbits such as these:

– 63% of people who initiate conversations about steampunk fashion are younger than 30.

– 33% of conversations about steampunk fashion are found on gaming sites. [Note: I assume this is in part to games like Dishonored and the upcoming Bioshock Infinite.]

– The social network for steampunk enthusiasts is Twitter, which has six times more steampunk chat than Facebook.