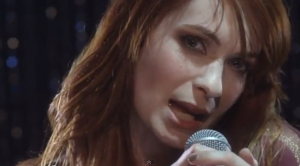 There’s a reason that all the uncool kids are listening to it. Written and directed by Jed Whedon, the brains behind The Guild’s songs “Do You Want to Date My Avatar” and “Game On,” “I’m the One That’s Cool” is a danceable song with a touch a bitterness and a whole heap of eff-you.

OMG thank you guys SO MUCH for making us #7 on iTunes in Rock, and #1 on Amazon! I’m literally crying. Indie victory high fives

I couldn’t confirm that the song was #1 on Amazon, a spot currently occupied by “We Are Young” by Fun. As of the time of this writing, it’s #1 on Amazon’s “Movers and Shakers” list as well as “Rock.” It’s hard to pin down precise numbers, considering Amazon updates their rankings hourly.

However, I could confirm that right now the song is #37 overall on Amazon.com. It’s currently #3 on iTunes’ Rock singles, but it’s not ranked in the Top 100 overall.

You could buy the song to show Day how much you adore her (which I did within 30 seconds of my iTunes preview). But for the video, all you need to do is look below: