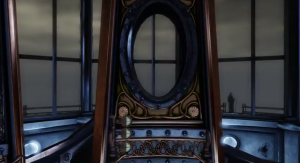 Irrational Games has released the first five minutes of their upcoming title, BioShock Infinite (BI), the not-quite prequel game to BioShock I and II.

The “Infinite” likely refers to parallel dimensions; lead designer Ken Levine has previously discussed how there will be warps in the fabric of Columbia that open up into…other worlds? Times? We don’t know for sure, but the chronology of this floating city may be more complicated than Rapture’s fictional 1930’s.

There are some nice echoes of the original game in these five minutes. As with BioShock, BI opens with an arrival at a lighthouse, although this time accompanied…and presumably it’s not an implanted memory. Inside the lighthouse, we see the first of several cross-stitch samplers, offering us all manner of promises (“Of thy sins I will wash thee clean”), reminiscent of Andrew Ryan’s written pronouncements in tone, if not in content. This lighthouse is occupied—and the occupant is dead.

The trailer ends with a mode of travel that starts like an elevator but ends like a rocket. Just summoning it starts the sky off in a series of flashes and tones like a cut scene from Close Encounters of the Irrational Kind. Even so, once we’re secured inside it—and I do mean secured, our chair has snapped bindings on us—we’re once again looking through a porthole.