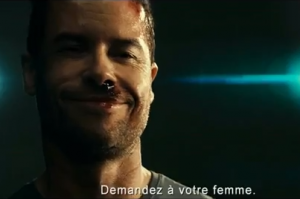 EuropaCorp has released the first five minutes of Lockout, and boy, they’re good ones…if you like the idea of watching actor Guy Pearce eating several servings of knuckle sandwich. And after more than 30 seconds with the overly cocky character, Snow, you’ll enjoy every single punch.

If you’re hearing about Lockout for the first time, you might categorize this film in “action” with a subcategory of “spy.” But Lockout (formerly known as MS One: Maximum Security) is actually a science fiction thriller, with an emphasis on “thrill.”

Although it’s impossible to tell from the first four minutes, this movie mostly takes place on a space station. Our hero (if you could call him that) has to save the president’s daughter from a space station full of convicts too dangerous to house on Earth. Sounds like a cheesy rip off of the cheesy Escape from New York? Absolutely. But check out the first five minutes, and you’ll see that directors James Mather (a former cinematographer) and Stephen St. Leger (his first major film) have taken more than a few cues from writer Luc Besson (who directed 2008’s Taken, the 2007 film, The Fifth Element, and the fabulous 1994, The Professional).