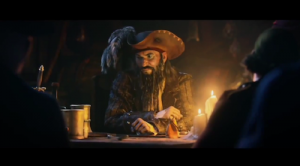 Do you like pirates? If the answer is yes, chances are you’ll like Assassin’s Creed IV: Black Flag (AC4), which promises a Captain Blood (1935)-style adventure on the high seas. If you don’t like pirates, you’ll likely be disappointed. And if you like the AC saga, you’ll be disappointed even further: In this two-minute trailer, which has been leaked before its official release on Monday, there’s very little that resembles the series we know and love.

The words “Assassin’s Creed” implies: 1) Clambering across buildings, 2) Stealth attacks, 3) Modern-day characters weaving the past into the present, 4) Stealthy distance attacks, and 5) Stabbing from behind. The trailer made good only on #5. AC4, for the most part, promises ships and ship-on-ship action. I sense underwater adventures ahead too.

This, and that lack of a modern-day characters, means this trailer for the next installment in the AC series is one that has piqued my disinterest.

It’s possible Ubisoft have something wonderful up their brocade sleeves. It seems we’ll be roaming the streets of a pirate haven (and those buildings we glimpse in the background look climbable), where we commit one–and only one–unbelievably cool backstab. Also, there are some high-powered graphics in here and some extremely slick motion capture. Really, the trailer looks good.

But it also set of my bogometer. Narrated by Blackbeard—who I can assume will be a character, much like Leonardo da Vinci was in Assassin’s Creed II and Brotherhood—the pirate tells us that our protagonist, Edward Kenway, is a captain of renown with a shadowy secret. But that secret is that he’s an assassin. How do we know? Because he’s flying the freakin’ flag of the Order of Assassins, that’s how.

My bogometer dipped into the red when I realized each passing game is moving away from its core concepts. The first AC in 2007 gave us a modern-day character, Desmond, who was forced to relive his ancestor Altair’s memories in order to find an ancient technology; when Desmond did not live Altair’s life accurately, he lost synchronization, in other words, health. It was an incredibly intelligent way to justify losing/regaining health in a game, one of the few games to even attempt to do so.

ACII (and sequels) gave us health potions, thus breaking the concept of synchronization that the first game established. However, Desmond’s ancestor, Ezio, was a likeable character, and through him, we roamed the streets of medieval Italy, climbing cathedrals and slicing enemies like it ain’t no thang.

What will the fourth game give us? We won’t know until we play it. And I admit I’m being hard on a game based on its two-minute trailer. But I can say that at first blush, it seems AC4 looks like a decent enough seafaring game, with more than enough buckles to swash.

But without Templars and the Animus, it’s just not an Assassin’s Creed game.

[UPDATE: Yes, obviously there’s an assassination at the end of the trailer. When I used the word “lack” I meant in the sense of “scarcity.” As in “there’s only one.”

Also, readers pointed out that the person Edward murders is wearing a symbols of the Templars. I had missed that, and thanks for spotting. But I still hold that this game feels more like a pirate adventure than an AC game.]