First Game of Thrones Vlog Gives Us Glimpse of Season 3 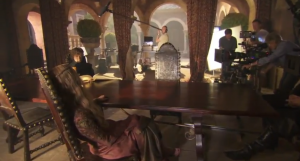 The HBO television Game of Thrones has released their first vlog for season 3, which focuses on the art direction of the show. Crewmembers discuss the importance of the look and feel of the scenery and props, to help create the world of Westeros. But that’s not all we get.

Here, we also see glimpses of upcoming scenes and characters we have yet to meet, such as Jojen Reed (played by Thomas Sangster), whose family has pledged to support House Stark—and has, dare I say, special abilities.

We even see minor spoilers. For example, from what I can tell, it seems as if Osha, rather than Hodor, will be taking Bran Stark north. I wonder why this decision was made, other than the fact that actress Natalia Tena is fabulous to watch. As we know from the book, Hodor’s simple-minded nature is important to Bran’s journey later on.