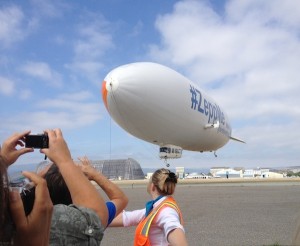 The Eureka comes in for a landing. Photo by Carol Pinchefsky

When I told my friends and family that I was going to Moffett Field, California, to take a journey on Airship Ventures’ zeppelin, Eureka, each and every one of them said, “Oh, how cool! Hey, waitaminnit. Don’t they blow up?”

I explained the issue that led to the Hindenburg disaster, which claimed the lives of 36 people over Lakehurst, New Jersey, did not apply here: These semi-rigid airships, known as New Technology (NT) zeppelins, use inert helium, rather than the old-style flammable hydrogen, for their lift. Tests show that non-rigid airships (blimps) can survive high-velocity bullets and even missile fire without so much as a spark.

Now that this information should help the zeppelin rise above its old reputation, here’s why a flight should be on every person’s bucket list:

Flying in a zeppelin at 1000-1500 ft. above the ground differed from all the airplanes, light aircraft, and seaplanes I’ve been privileged to fly in. For one thing, it was far quieter. The persistent dull roar of the engines in large airplanes–and the lawnmower sound of smaller airplanes (which may account for the fatigue that travelers feel during and after long flights) –is muted in a zeppelin. My fellow passengers and I chatted with voice that were only slightly raised.

Airship Ventures’ website states that the airship had less vibration than a plane, and I can attest to that. I shared the flight with several participants in the Teachers in Space program, who made use of the lack of vibration for their science experiments.

Better yet, the nausea-inducing lurches that occasionally occur in airplanes did not happen here. Ascending (and later, descending) was smooth, despite the extreme angle the pilot happened to employ. (The flight attendant, Ayonis Spinks, said that most pilots take off and land vertically, like a helicopter.)

Within a minute of being aloft, Spinks encouraged us to unfasten our seatbelts and walk around the cabin. There was a panoramic window in the back, and all of the passengers handed her their cameras and cell phones for photo ops. From our height, the view of our patch of Silicon Valley was gorgeous. Best of all, Spinks opened the windows the moment we leveled off. She even encouraged us to hang our heads out the windows like enthusiastic dogs. (Up in the altitude, it was cool enough for me to don my sweater, but with that, I was completely comfortable.)

This is a kind of freedom in the skies I would expect in hot air balloons, but without the noise of the burners to disrupt your thoughts. Flying in a zeppelin was the most tranquil experience I’ve ever had in the air.

I can honestly recommend an Airship Ventures’ zeppelin flight as a memorable although not inexpensive (prices start at $375 and go up to $950, plus taxes) tour of Mountain View, California, and its surrounds. But what about airships for more practical purposes?