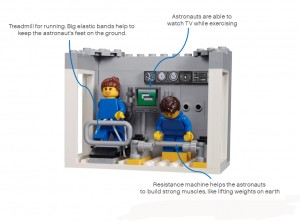 NASA has had all sorts of collaborators in its 54-year history. Universities have helped NASA advance the study of science. Non-profit organizations have helped NASA promote education. And industries such as aerospace have benefited from NASA’s research (as well as NASA’s contracts). NASA broke its own mold last year when it partnered with Microsoft to create a Mars rover landing simulation for the Xbox. Now NASA is getting itself another non-traditional partner: the toymaker, LEGO.

Specifically, NASA and LEGO are holding two design competitions for LEGO builders who can create their vision of space…or for space enthusiasts who can turn their imaginations into bricks.

In the first competition, builders have to design one of NASA’s missions planned for the 2030s, which you can find here. Potential designs include a space telescope and a Mars lander. This competition is open to builders 16 and older, and the winner will earn NASA memorabilia and a LEGO set, as well as acknowledgement on NASA.gov.

The second competition, however, is a little more detailed. Not only do entrants have to build a LEGO set of the aircraft of tomorrow, but also they have to write a supporting academic paper. But in addition some sweet swag, the grand prize winner will receive the opportunity to give a presentation of their project to NASA and/or LEGO…and NASA may publish the winning paper.

The second competition is broken into two categories: students (13-18) and participants of any age.

You have until July 31, 2013, to complete your own acrylonitrile butadiene styrene (a.k.a. LEGO)-based creation. Anyone can participate, except for residents of several U.S.-sanctioned countries, such as Cuba and North Korea (and for some reason, Quebec). The rules can be found here.

As with NASA, LEGO also works with other companies, but recently the Denmark-based company has been on a collaborative roll, and not just with videogame company Traveller’s Tales and properties such as The Hobbit. Recently, to promote a recently aired LEGO Star Wars TV special, LEGO brought a record-breaking, life-sized, and dare I say totally cool LEGO X-wing to Times Square.

I’m looking forward to the results of this competition. If you merge NASA’s spacefaring pursuits with LEGO builders’ imaginations, the two should go together like, well, two bricks.