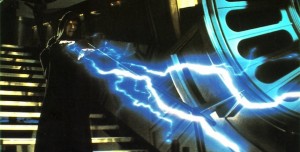 It’s been eight years since the release of Revenge of the Sith, a long time to go without watching someone Force Lightening someone into a crisp. This isn’t as long as the sixteen-year wait between Return of the Jedi and The Phantom Menace. Now it seems that fans of the Star Wars universe won’t have to wait nearly as long between movies. According to ComingSoon, Star Wars fans—who have resisted the moniker Star Warriors—will be getting one new movie each year, starting in 2015.

Walt Disney Pictures and Lucasfilm announced today at CinemaCon in Las Vegas that Star Wars: Episode VII will hit theaters in the summer of 2015 and that every summer after that will offer a “Star Wars” film, alternating with one of the standalone films.

In other words, Episode VII should air summer 2015 and Episode VIII will air 2017. In 2016 and 2018 we’ll be grabbing a bucket of popcorn and watching non-trilogy Star Wars movies.

The Twitterati are already concerned that there will be a Star Wars overload, that the movies will be “force marched” out as fast as Disney can make them. After all, Disney isn’t typically known for pumping out entries in a franchise this rapidly (Pirates of the Caribbean notwithstanding). Actually, I suspect this is a move to get the most out of Mark Hamill, Carrie Fisher, and especially Harrison Ford, while they can. (Personally, I’m hoping for more Billy Dee Williams.)

But I counter that this is exciting news. As we’ve known to since February, Lawrence Kasdan, who wrote The Empire Strikes Back, is on board for the stand-alone films and is consulting on the final trilogy.

How many movies will we ultimately be getting? Always in motion is the future. But it’s likely that Disney will want a return on its investment: The House of Mouse paid $4 billion for George Lucas’ property.

The seven Star Wars movies (both trilogies, plus The Clone Wars) have earned almost $4.5 billion internationally—not adjusted for inflation. But this figure does not include the sales of merchandise, which Lucas also sold to Disney as part of the deal. Merchandise sales, which Lucas famously retained in his deal with 20th Century Fox for the production of the original Star Wars movie, were what gave Lucas the financial independence he needed to finance The Empire Strikes Back and all subsequent movies himself.