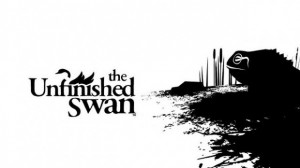 There’s a reason why Forbes’ David Thier called Giant Sparrow’s The Unfinished Swan “E3 Best of Show.” The Unfinished Swan, for the PS3, is both curiously challenging and bare-bones simple. In a universe of shooting games and sports games, this “first-person painter” stands out as the most unique game of 2012.

I was instantly charmed by The Unfinished Swan when I got my hands on it. I stood in a world of white, essentially a blank canvas. Then I tossed one of my unlimited black paint balls in the air and watched it splatter as it connected with the “landscape”… that one that isn’t there. When the black color splashed against the background, it created definition and a sense of space. The world around me emerged, flecked in black paint.

Depending on where players toss the paint ball, it splatters across the landscape at a slightly different angle than a previous play-through. The result: Every single game you play will look unique.

Creative director of Giant Sparrow, Ian Dallas said he wanted to evoke a sense of awe and wonder, and he certainly has done so. The Unfinished Swan is a world that fosters mystery. Considering that our only guide in this not-quite-empty world are the yellow footprints of the swan (who fled from a painting that’s the only possession you have of your late mother), you never know what is going to emerge around the corner.

At one point, I covered giant frog statue in paint–and jumped, startled, as the frog came to life and sprang into the (invisible) lake in front of me.

According to Dallas, everyone who plays The Unfinished Swan “plays the game differently. Even though I’ve seen well over a hundred people play the game, every single person splats [the paint ball] differently and looks at different things. We had a nine year old play recently and he stood in the opening room and painted everything black.”

Of course, if you toss too many paint balls, the world becomes completely black, and you lose that sense of definition. It’s the same disorienting effect if you’re standing in a world that’s completely white.

Dallas said, “It’s cool that the mechanic of throwing these paintballs is flexible enough that people’s personalities come through. It’s a question of how you deal with uncertainty in your life. People that are very cautious will stand in one spot and carefully splat things…. Other players will splat something way in the distance and say, ‘I’m probably going to be okay’ and just jump down. And it’s so cool to see people have something in their real life reflected in the game like that.”

The Unfinished Swan has four chapters, and the white-room-black-paint chapter is only the first. A second chapter involves tossing water and is the longest segment of the game. As for the third and fourth chapters, Dallas prefers to keep it a secret for now.

The game is meditative, even calming, similar to the experience I had while playing Flower. I’m very much looking forward to its release, which according to Dallas should be some time in late 2012.