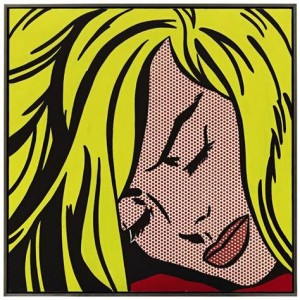 There’s nothing sadder than a poor artist on a streetcorner with a cup in his hand and a sign around his neck that reads, “Will pencil for food.” But that’s the fate of artists who are out of work—comic book artists among them. Had the late Roy Lichtenstein been alive today, he would never have that problem: After a recent Sotheby’s auction, Lichtenstein’s estate is richer to the tune of $44.8 million, thanks to the sale of his 1964 painting, “Sleeping Girl.”

Lichtenstein elevated comic book art into high art crossed with parody, and his use of Ben-Day dots is fun and funny. His success is deserved. But this sale has bothered me for one important reason: Lichtenstein passed away in 1997, and he isn’t around to enjoy the fruits of his labor.

Meanwhile, living, breathing, and hungry comic book artists are on the prowl for their next Corel Painter upgrade. I see them at comic book conventions, row after row of them sitting in an “artist’s alley,” like pound puppies hoping to be adopted. These artists are eager, nay, overjoyed to see their fans, even the surly artists who hate people. Because they know that making the fans happy makes their publishers happy, and that ultimately keeps them off the streets.

Yes, some comic artists aren’t as good as others, and only a few are as good as Lichtenstein. But many of them are extremely talented and equally underappreciated by the masses. Here’s why you should purchase art from comic book artists—either panels from a comic book or one-off commissions—and why they deserve patronage more than any deceased master.

You’re guaranteed art that will suit your personal taste.

Buying art from the artist guarantees that you won’t be purchasing a forgery.

There’s a reason that forgery is a time-honored tradition and a staple of heist movies:  It’s a typically bloodless yet lucrative crime, and the victims aren’t the type to air their grievances on Judge Judy.

Why subject yourself to the ridicule of purchasing a forgery—like the time Hermann Göring bought a fake Vermeer. Oh, how we laughed—when you can buy a piece of art from the hand of the artist him/herself?

Comic book art has had only a few notable forgeries (here, here, and a few here). But do you really be want to knows as “the guy who bought that fake and is now a funny Internet meme.”