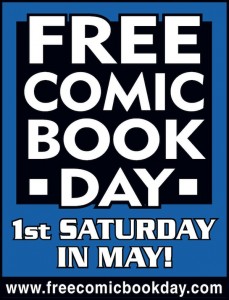 Spider-Man Season One. Witchblade. Buffy the Vampire Slayer. Avengers Age of Ultron. These are some of the titles available on May 5 for the low, low cost of absolutely nothing at all. Although the word “free” is in the title of Free Comic Book Day (FCBD), the event is embraced by comic book publishers and store owners alike for boosting their bottom line.

Marvel, DC, Dark Horse, Image, Top Cow, Top Shelf, as well as many independent comic book publishers, are participating in the eleventh FCBD, an annual give-away of multiple titles, designed to draw readers—and potential readers—into the comic book store. Over one million people flocked to their local shop last year, double the number from five years ago. And whereas five years ago only fifteen countries participated, this year fifty will be involved.

Readers have the opportunity to take home titles they wouldn’t normally purchase, such as 2000AD, a British title and the home to the tough-talking, law-giving Judge Dredd. They can also get their hands on a special preview issue of Hypernaturals, a series that won’t launch until July. And if die-hard Marvel fans want to read a DC Comic book without paying for it, they can snag The New 52, a look at the happenings of the DC Universe, featuring a new story by chief creative officer Geoff Johns. There are also multiple comics to pique the interest of young readers, such as Donald Duck Family, Sonic the Hedgehog, and Top Shelf Kids Club.

Depending on your location, you could even get your comic books autographed: many writers and artists are appearing at stores across America to meet the fans.

But readers aren’t the only ones who benefit. FCBD creator, and owner of Flying Colors Comics in Concord, California, Joe Field sees the event as good for business:

“I’m told by a lot of retailers, and I’ll bear that out in my own store, that Free Comic Book Day is one of the best days of the year in terms of business. We use Free Comic Book Day as a way to just get people ignited about comics…and to come back to the store week after week. It turns out, with the number of people who show up, it’s no secret that it’s become one of the best business days of the year.”

Lorraine (who would not give her last name), a manager at Jim Hanley’s Universe who has worked there for four years, agrees. “People who wouldn’t normally come in look around the shop. They see something they like and they buy it. It’s a very good business day.”

Business is good overall, according to Field. “We’ve seen while other print media, especially magazines, have been having a difficult time in the digital age, we’ve been seeing growth in comic book sales.”