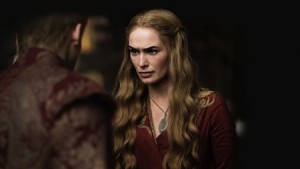 Game of Thrones has finally arrived, and the first episode, “The North Remembers,” is as smart, funny, brutal, and painful as anything in season 1. Of course, this is no surprise to the readers of the second book in George R.R. Martin’s series, A Song of Ice and Fire. If you can believe it, the violence has even been turned up a notch. This show is not for the weak of stomach. But it’s as rewarding as any show on television.

The summer is finally over, fall is here, and winter is coming. The threat hangs over these characters, and when we encounter them again, they’re not as carefree as they were before—if they ever really were.

Poor frightened Sansa is hostage to Joffrey, whose cruelty is awfully creative for someone who hasn’t had his first shave. But Sansa is not without her resources, and she manages to convince the young king to spare the life of a knight. Whatever else the scene may have held is irrelevant because in walks Tyrion Lannister, and it’s impossible to pay attention to anything else when Tyrion is in the room. He greets, he drinks, he leaves. He could be reading the phone book for all I care. I can watch him for twenty-four hours, seven days a week. In fact, why isn’t this show Tyrion Lannister: All Tyrion, All the Time?

Anyway, Tyrion has become the Hand of the King to the great displeasure of Cersei, the queen regent, ever since Robert met an untimely yet altogether predictable death in season 1. (Seriously, has any character in the history of television ever had such a bright, shining target painted upon him? Every time he appeared, I wondered, “Why isn’t he dead yet?”) Cersei takes the news with quiet grace and—no, wait, she totally pitches a fit and sulks. But she’s not done. She has her own muscles to flex, in more ways than one.

We finally get to meet Stannis Baratheon, the man who would be king. With Stannis is his second-and-command, Davos Seaworth, and Melisandre, the priestess of the god of fire, Rh’llor. When we meet her, she’s burning the seven gods of Westeros in effigy. Subtle.

We also learn straight away that Stannis a man of few carefully chosen words. “My beloved brother, Robert” a scribe writes for him. “I didn’t love him…. A lie. Take it out.” That sums up most of what we need to know about Stannis.

Jon Snow, the late Ned’s bastard, goes north of the Wall to look for his missing uncle, Benjen Stark. What he and his brothers of the Night’s Watch find are abandoned villages (cue foreboding music) and Craster’s Keep. The Keep is the home Craster and his wives, who are also his (eek) daughters. Queasy yet? No? Oh, you will be by the end.

Back to Cersei. She and Littlefinger have a minor confrontation, but Cersei wins the day by the mere fact that she has an armed guard at her command. Her confrontation with her son Joffrey goes a little less well. In a scene that is not in the book, Joffrey asks his mother outright if it’s true that he’s not Robert’s true son. They fight. Cersei loses her trademark cool and slaps him. Sadly, she only slaps him once.

(In case you think this isn’t enough, please visit YouTube for this satisfying Joffrey-slapping experience.)

The nausea-inducing ultraviolence comes at the end, when Joffrey (or Cersei, we never learn who) orders the death of all of Robert Baratheon’s bastard children. It was fairly startling to watch, and even I, who have seen all the horror of season 1, found it hard on the eyes.

What else did we get in episode 1? The scenes with Bran Stark and Daenerys Targaryen are brief but telling: Bran’s dreams of being a wolf are getting more vivid, more…real. And if that isn’t a warning of some kind, I don’t know what is. And as for Dany, she has nothing but dying horses and dragons too young to care for themselves, let alone her. But she does not lose her focus. And let’s not forget Jaime Lannister, hostage to Robb Stark and his mother, Catelyn.

But something we almost didn’t get: Arya. The youngest Stark daughter is now disguised as a boy, on her way north to the Wall. We see her for approximately eight nanoseconds. Hopefully, she’ll get more air-time in episode 2.

While watching “The North Remembers,” I had fleetingly thought it was is a bit slow—but that’s incorrect. The producers David Benioff and D.B. Weiss are actually lining up the pieces on a large chess board…and soon these pieces will come to life and kill everyone who stands in the way of their goals.

No, if there’s only one complaint I have about this episode is the scene with Cersei and Littlefinger. In a move that I can only call suicidal, Littlefinger tells the queen straight-out that he knows she’s been having unlawful carnal knowledge with her brother. To me, that was a misstep. Littlefinger would never play his hand like that. He’s so cunning that I could see him at home in the Dune universe, where there are “plans within plans.” (You’ll see what I mean in the upcoming seasons.)

Okay, I’m still annoyed that Joffrey was only slapped once. YouTube, here I come.