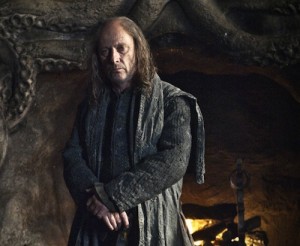 Game of Thrones spent its first season traumatizing us with its predilection for violence, and from the last week’s episode, we can tell season 2 would be equally scarring. But episode 2.02 was shocking for a different reason: “The Night Lands” had only one off-screen murder. And to compensate, the director filled the screen with breasts.

There was a great deal of sex in “The Night Lands,” and whether its startling, character-revealing, or just plain lascivious, none of it is actually sexy. In fact, Game of Thrones, characters have frequently coupled, but I don’t believe any of them has ever made love. Lest you think this is a criticism, it fits in perfectly with the book.

As an example of sex as character development, we see Theon Greyjoy using the captain’s daughter for his pleasure (“You’re not my whore. I’m not paying you.”), a window into the way Theon treats people. Perhaps it’s genetic. When Theon returns to the Iron Islands, his father greets him with outright contempt. And then there’s his cunning sister, Yara (known as Asha in the books), who lets Theon attempt to seduce her as a way of determining his character.

When Yara reveals her relationship, I realized we were viewing the third instance of incest in the series, after Jaime and Cersei and Craster and his daughters. I hope to the seven gods it will be the last.

And speaking of the seven gods, Stannis Baratheon burned them in the previous episode, and now the priestess Melisandre wants to replace more than his deity. She wants to take her place by his side…of the bed. Stannis refuses her out of obligation to his wife. But Melisandre promises him a son, and with that, he takes her on a table shaped like the map of Westeros. Wooden pieces, representing knights and castles, scatter and fall with their not-lovemaking. Subtle.

In the book, Littlefinger is as subtle as he is surprising as he is self-interested. But a scene with the prostitute Ros—who came to King’s Landing from Winterfell—contradicts all of this.

Ros, who is crying over the death of a child (see the previous episode), is unable to service a customer. Littlefinger tells her that a woman he had purchased from Lys had also cried, and so to cut his losses, he sold her to a cruel man, implying Ros would share the same fate. The whole scene angered me. First, Littlefinger is too cunning to threaten outright; second, he didn’t purchase Ros. She came from Winterfell, looking for work. There were no losses to cut.

Littlefinger is far more interesting when you don’t know what he’s thinking or what his motives are. Read the book to see what I mean.