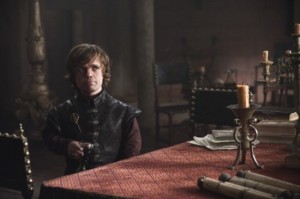 Tyrion: Thinking and drinking. And not in that order.

In last week’s episode of Game of Thrones, we had a surfeit of breasts, but a smidgen of killing. This week we had a modicum of breasts, but a plethora of killing. There were also two aborted sex scenes—one homosexual and one heterosexual. I mention this now to get it out of the way. I know it’s hard to ignore, because the show’s NC-17 aspects are frequently front and center. But Game of Thrones is so much more than that.

And speaking of Tyrion, in episode 3, “What Is Dead May Never Die,” he doesn’t so much manipulate as use his wits to his best advantage. And for him, the advantage is having Cersei at a disadvantage.

Tyrion told each remaining three members of the Small Council that he was marrying off his niece Myrcella, but he named a different fiancé to Varys, Littlefinger, and Maester Pycelle. When Cersei confronted him—as he obviously knew she would—she handed Tyrion the name of her confidante. Cersei may be cunning, but she’s not smart enough to realize that Tyrion has smoked out yet another one of her allies and removed him from power.

It’s the dungeon for old Pycelle, who had been enjoying an evening of bedsport until Tyrion rudely interrupted them.

But because Tyrion is a class act, he pays the prostitute in gold for her troubles.

And speaking of Tyrion and prostitutes, Shae is feeling fettered in her gilded cage. Tyrion manages to find a place for her in the castle…as Sansa’s handmaiden. Shae is not a natural fit for the job; she picks at Sansa’s leftovers and doesn’t have the political sense to remain unnoticed. But arguing with Shae is the closest thing that Sansa has to power.

Sansa, who had a depressingly polite conversation with her future monster-in-law, is reminded yet again that she will be marrying the man who is actively trying to kill her older brother. She seems resigned to it. She’s even resigned to Shae as her handmaiden. If the Game of Thrones were an actual game, Sansa is currently a pawn. Sadly, she’s fully aware of it.

King Renly is also being manipulated, but at least his wife Margaery is frank about it. It seems she knows that her brother Loras is Renly’s lover. Loras had shooed Renly away from their bed in order to consummate his marriage to Margaery. Now Margaery bluntly offers to have Loras join them in bed, or perhaps just start Renly off while Margaery finishes. She tells him, “Your enemies aren’t happy about us, and the best way to stop them is to put your baby in my belly.” Margaery is more knowing and accepting than any closeted husband could anticipate. But this information does not entice Renly enough to take to the marital bed.

Renly has a new right-hand man in the form of a woman, Brienne of Tarth. At the same time that Brienne is named as a member of his Rainbow Guard (yes, the gay man has a Rainbow Guard), Lady Catelyn Stark arrives to seek an alliance on behalf of her son, Robb.

Brienne and Catelyn have a brief exchange. “You fought bravely, Lady Brienne.” Brienne replies, “If it please you, Brienne is enough. I’m no lady.” Brienne is played to perfection by Gwendolyn Christie, and her almost-glum demeanor speaks volumes about the hardship of her life as a warrior woman.

In the Iron Islands, Theon’s father, Balon Greyjoy, decides to seize the opportunity to raid the north, now that Ned is dead and Robb is south fighting the Lannisters. Balon gives Yara a fleet…but Theon receives only one boat. Angrily, Theon confronts his father, who had given him up to Ned Stark to foster after Balon had lost his last war. “You gave me away like I was some dog you didn’t want any more, and now you curse me because I’ve come home.”

Theon, feeling unloved and unwanted, writes a letter to Robb Stark seeking…counsel? An alliance? We never know. Theon burns his letter rather than send it. Here we see he is motivated to prove himself to his father.

And speaking of fathers, a sleepless Arya is sharpening her beloved blade Needle while she and Yoren, a member of the Night’s Watch who is taking her to Winterfell, share a moment about the death of their loved ones and of vengeance. But their moment is interrupted by a small force of men looking for Gendry, who unbeknownst to them all is a bastard of the late King Robert.

This is where the abundance of killing comes in. It’s hard to tell, but I estimate a dozen of them die, including Yoren, who is painfully, mercilessly slaughtered. But not the three men who were imprisoned (Jaqen, Rorge, and Biter), because a quick-thinking Arya tosses an axe to them so they can free themselves.

When the soldiers ask for Gendry to show himself, Arya does not betray her friend. Instead, she points to a recently deaded boy and says, “You already got him.”

The rest of the episode had some brief segments north of the Wall and at Winterfell. We saw a bit of Jon Snow and Sam Tarly (who is one of the show’s sweeter characters—not that “sweet” is a prized quality north of the wall), plus a tender moment with Bran and his maester, Luwin. We didn’t see Joffrey and Daenerys, but from the trailer, we can expect to see more of them in the next episode.

To sum it up, in episode 3, “What Is Dead May Never Die,” the pieces are moving around the board in the game that is Game of Thrones. But only Tyrion Lannister was actively moving those pieces.