‘Game of Thrones’ 2.04 Recap: Torture and Beatings and Joffrey, Oh My 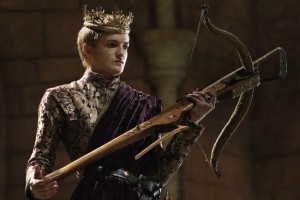 Do you know what love is? Sure I know. A boy loves his crossbow.

My husband said, “I want to wind down on a Sunday evening, not wind up.” But peace of mind was not to be had in our household after watching the Game of Thrones episode, “Garden of Bones.” Too much torture, too many threats, too much unsexy sexuality, not to mention two scenes featuring Joffrey, in neither of which he gets slapped. Plus, both scenes devolve into a sexual cruelty that would make the Marquis de Sade cringe.

“Killing you would send your brother a message,” King (egads, King) Joffrey said as he pointed a crossbow at his fiancé, Sansa. But since Mommy Dearest needs Sansa alive, he settles for having one of his knights beat her and rip her dress. Tyrion rescues Sansa by sweeping in with a few witty quips, and I actually love him more now than when I did in the last episode “What Is Dead May Never Die,” if such a thing were possible.

In the book, that scene with Sansa was particularly disturbing because Joffrey had her stripped naked, but obviously, the HBO wouldn’t show 16-year-old actress Sophie Turner sans garments. So how did the writers portray Joffrey’s cruelty? They one-upped the book in a spectacular manner.

Joffrey finds two prostitutes in his chambers (an unnamed woman and Ros, who are on the job while Littlefinger is away—what a work ethic!), and rather than receive their attention, Joffrey orders them to attend to each other. But when he realizes that Tyrion had sent them, he commands Ros to spank the other woman. Then whip her. And then beat her bloody with his stag-horned scepter while aiming a crossbow at them both. It was a horrifying progression, and it was done to send a message to Tyrion. So Joffrey isn’t just cruel, he’s cunning too.

Ros and her unnamed pal (Producers everywhere: If a woman plays a prostitute and is naked throughout an entire scene, her character deserves a name, damnit!) weren’t the only ones to suffer.

Arya Stark, along with her friends Gendry and Hot Pie, have been taken captive by the Mountain and are herded into a roofless room. There they await torture. An unnamed SOB (in the book, the Tickler) has the task of extracting information on his enemy’s whereabouts. He does so in a creative yet horrifying manner—placing a rat in a bucket, strapping the bucket to the chest of prisoner, then setting the bucket on fire. Sadly for the prisoners, no on knows the answers to his questions.

Just in case you were curious, no, answering the questions does not stop the torture.

This gives Arya the opportunity to focus her rage. On the advice of the late Yoren from the previous episode, she begins to name all of the people she needs to kill: Cersei, Joffrey, Ilyn Payne, the Hound. As she lingers in the makeshift prison, she adds the Mountain and the cruel guard Polliver to her list.

Irony of ironies, Arya’s savior is Tywin Lannister, who arrives at Harrenhal and dresses down the torturers for their inefficiency. After all, why turn prisoners into corpses when they could make perfectly good laborers? (You don’t get to be the richest man in the Seven Kingdoms by wasting resources, ya know.) Then Tywin recognizes Arya as a girl, and rewarding her cleverness, makes her his personal servant, a cupbearer.

In the book, Arya becomes the cupbearer to Roose Bolton. Instead, we see Roose on the battlefield, inspecting the Lannister men that Robb Stark had defeated. Roose suggests that Robb kill one of the wounded, but Robb helps a healer remove his foot instead.