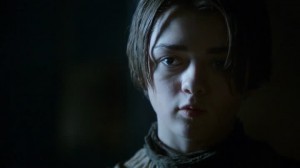 I’m not giving away too much with my title, when you consider just how many characters in Game of Thrones are vying for the Iron Throne, a spiky piece of furniture currently held by Joffrey Baratheon. There’s Stannis, the elder Baratheon; Renly, the younger Baratheon; Robb Stark, King of the North. Theon Greyjoy’s dad, Balon, is on the verge of making a play for his old title, King of the Iron Islands. We’re going to be meeting Mance Rayder, the King Beyond the Wall, soon enough. That’s a lot of damned kings, and I’m not evening counting Daenerys, who’s been hatching plans for conquest ever since she’s hatched her dragons.

And now, after the episode “The Ghost of Harrenhal,” we’re one king less.

Catelyn Stark, surely in the running for the series’ most pragmatic character, finally gets her meeting with Renly. They come to terms: if Robb swears fealty to Renly, Robb will get to keep the title of King of the North and the lands that come with it. They will defeat the dour Stannis together.

The exact moment the words, “Together we can end this war in a fortnight” leave his lips, Renly is stabbed through the heart by a wraith, the “son” that Melisandre had promised to Stannis. Renly dies with shocking suddenness that we’ve come to expect from the pen of George R.R. Martin.

The only witnesses—and therefore, the only suspects—were Catelyn and Renly’s loyal champion, Brienne of Tarth. They flee together. Brienne swears fealty to Catelyn, on the condition that Lady Stark does not prevent her from killing Stannis if and when the time comes. Cat can see that half a deal is better than none and accepts Brienne’s revenge-tinged terms.

(Question for the producers: Did Cat take Ned’s bones with her, or did she leave them behind at the scene of the crime?)

Renly’s lover Loras is overwrought by Renly’s death. His wife, not so much. When Littlefinger asks her if she wants to be a queen, Margaery Tyrell utters the best line in the episode, “No.” She pauses. “I want to be the queen.”

Silly Margaery. Shouldn’t you know by now that ambition is just about the worst thing you can have in this time and place?

Tyrion, who can put two and two together faster than Pythagoras, recognizes that Stannis’ forces, combined with Renly’s army, now outmans the forces of the Crown. King’s Landing needs to prepare. He conveys this information to Cersei, who does not seem to give one single damn. In fact, Cersei knows something that Tyrion does not, and she holds this piece of information—and his lack thereof—over him.

Silly Cersei. Shouldn’t you know by now that Tyrion is smarter than you?

Tyrion, the Hand of the King until Tywin is finished fighting the crown’s enemies, easily wrangles information out of his poor cousin Lancel, also Cersei’s lover. (It slipped my attention last week that this was the fourth instance of incest in the season. Seven hells, make it stop.) Cersei has ordered the Alchemists Guild to create “wildfire,” an alternate-reality napalm.