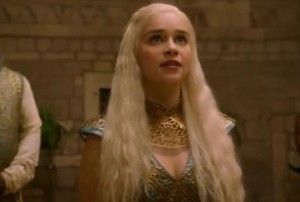 I need seven kingdoms. Is that too much to ask?

The producers of Game of Thrones must have received the raven-message I sent to them. I offered them a bargain: As long as fabulous young actor Jack Gleeson gets the smirky sneer slapped off of Joffrey’s face every so often, I’ll keep watching. Poor Gleeson should know by now that his face is an occupational hazard.

Well, we’ve kept both ends of the bargain. I’ve been riveted to the television each week. And last night, in “The Old Gods and the New,” I got to see Joffrey slapped and hit in the face with cow dung. It’s a win-win.

But of course, there are always losers in this game of thrones, and the biggest ones are the occupants of Winterfell. Theon and his men did what we feared: seize an unprotected Winterfell and force young, crippled Bran to yield. But not all of Winterfell submits willingly. The loyal master-of-arms, Ser Rodrik Cassel, spits in Theon’s face. Theon’s right-hand man whispers that Cassel must “pay the iron price” or else Theon’s men will never respect him. Theon sentences him to death.

Because he’s so tough that he’s actually giving orders at his own execution, Cassel insists in the old North tradition, that the man who passes the sentence should swing the sword. Of course, Theon being Theon, he botches the beheading. It takes four inelegant swings, plus a savage kick, to rend Cassel’s head from his body. Eek.

As for Osha, a captive of the Starks who tried to kill Bran in season 1, she offers her fully naked body in exchange for her freedom. It makes me wonder if the casting call for the show read, “Actors wanted. Must be willing to wear clothes on occasion.”

Osha beds Theon—and mercifully, the sex scene was omitted—but she had actually planned a double-cross. She flees in the night with Bran, little Rickon, their direwolves, and Hodor the gentle, slow-witted giant.

North of the North, the brothers of the Night Watch venture out to stop a wildling search party. They fight, and the Black Brothers defeat the wildlings. All but one: a ferocious fighter named Ygritte, who also happens to be a cute redhead. The men head out while Jon stays behind to kill Ygritte. But Jon, cursed with the Stark sense of honor, is unable to. Ygritte flees. Jon follows and captures her again, but now he’s hopelessly separated from the Night Watch.

He and Ygritte bed down in the snow for a night. Ygritte, seeing a particularly smutty window of opportunity, wriggles against Jon’s body suggestively. “Stop moving,” he grumbles.

In King’s Landing, Cersei tells Tyrion that she means to destroy anyone he loves, her revenge for marrying off her daughter Myrcella to a prince in Dorne, the southern-most part of Westeros. Spiteful Cersei can’t see that Tyrion is saving Myrcella from the war that’s bearing down on them. But that’s far from the only problem the Lannisters have: The people are starving, and when Joffrey walks among them, someone flings—joy of joys—cow dung in his face.

Joffrey shouts, “Kill them all,” and madness ensues. Worse, Sansa is separated from her guards. Tyrion, who knows that if Sansa is harmed, his captive brother Jaime’s life is forfeit, is beside himself. “We’ve had vicious kings, and we’ve had idiot kings, but I don’t know if we’ve ever been cursed with a vicious idiot boy king!” He smacks Joffrey! Two hits in one episode! I’m so happy!

Poor Sansa is soon cornered by angry peasants, who try to rape her. Suddenly, like a knight in dubiously acquired armor, the Hound rescues her. Oh wait, first he opens the peasants’ innards and turns them into outtards, then he rescues her. But she is safe. Tyrion tries to congratulate the Hound, but the Hound wants no praise. “I didn’t do it for you.”