‘Game of Thrones’ 2.07 Recap: So Little Honor, So Much Mayhem 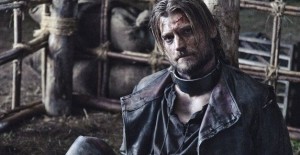 No shoes, no shirt, and he still gets serviced.

“A Man Without Honor” starts with Theon Greyjoy and ends with Theon Greyjoy. But he’s not the man without honor. No, that title belongs to Jaime Lannister, who appears for the first time this season. But after the events in this episode, I argue that on the day that honor was doled out, Theon was at a brothel, refusing to pay a prostitute for her services.

Theon, the conqueror of Winterfell, learns that crippled Bran, little Rickon, half-witted Hodor, and Osha the Wildling have fled. Theon viciously beats the guard who let this happen. Then he calls for horses and hounds and goes hunting, because today is the first day of Stark season.

In the North, Jon Snow and Ygritte have a frank conversation about sex. (“You know nothing, Jon Snow.”) Actually, the chatty and amusingly foul-mouthed Ygritte does most of the talking. Even though Jon has her bound with rope, Ygritte is very much in charge of the situation; soon, she trips Jon up with his own rope and flees. Jon follows—straight to the wildlings. “You should have killed me when you had the chance,” Ygritte tells him.

This short description was played out over three scenes, marking the first time I felt Game of Thrones was padded in any way. I figure the producers said, “We almost froze our [insert appropriate reproductive organ here] off in Iceland to film these scenes, we’d better damn well use all of it.”

Another scene that seemed slightly padded was the scene with Tywin and Arya, which didn’t accomplish much except once show us that Tywin–when he isn’t ordering Gregor Clegane (“the Mountain”) to burn villages to the ground–seems to admire his cupbearer. Arya does a poor job of playing the servant girl though, what with her knowledge of history, her speech, and her Arya-ness. What, you may ask, is Arya-ness? Well, at one point, as Tywin was talking, he turned away from her. Arya grabs and knife and stares intently at his neck.

My other girl, Sansa, starts off by thanking Sandor Clegane (“the Hound”) for saving her from rape in the last episode. The Hound is the third contender for the title, “a man without honor,” but what he lacks in honor, he makes up for in brutal honesty: the killing itself is all the thanks he needs. Sansa calls him hateful, but he responds, “You’ll be glad of all the hateful things that I do some day when you’re queen, and I’m all that stands between the way of you and your beloved king.” (Commence San-San fan fiction writing in three, two, one. Go!)

Sansa soon discovers her first menstrual cycle is here. That means she’s ready to be married. To Joffrey. No wonder she takes a knife to her sheets, to tear out the evidence. But despite the efforts of her maid, the undercover prostitute Shae, the Hound finds out. Sansa is taken to the queen. Surprisingly, Cersei reveals her late husband Robert’s callous behavior during childbirth. She even gives Sansa a piece of motherly advice to love no one but her children.

Even more surprising: Cersei confesses to Tyrion that she realizes that Joffrey is cruel and uncontrollable. She also reveals to the brother she hates (Tyrion) that the brother she loves (Jaime), she has loved in an unbrotherly way.

Most surprising of all is that Cersei cries. Tyrion, usually sharp-tongued, stands silent next to her in sympathy. But he looks away from her and doesn’t touch her.

Daenerys is still in shock from the death of her maids and the loss of her dragons. Jorah tries to comfort her, but the only comfort she needs is the draconic kind. Her protector, Xaro Xhoan Daxos, calls for a meeting of the Thirteen, council of Qarth, so she can demand information. But it was all a double-cross, engineered by Xaro and the warlock, Pyat Pree, to get all Thirteen in a room at the same time. Pyat magicks them to death, then tells Dany to come to the House of the Undying…where she will find her dragons.