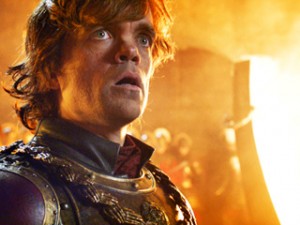 I didn’t know how to summarize the penultimate episode of season 2, “Blackwater,” so I thought I’d have the opening crawl of Star Wars III: Revenge of the Sith do it for me: “War! King’s Landing is crumbling under attacks by the ruthless King Stannis. There are heroes on both sides.”

But Tyrion is ready for them, as ready as he can be, considering Stannis’ navy outnumbers the king’s ten to one, and his army, five to one. When Stannis arrives, Tyrion, Bronn, Joffrey, the Hound, plus an entire army are on the city wall, waiting for them. And when Stannis’ ships approach King’s Landing, Joffrey and Ser Lancel are horrified to see that their fleet is gone.

Joffrey threatens to have the Hound cut Tyrion in two. Tyrion says, “That would make me the quarter man. Just doesn’t have the same ring to it.”

Tyrion orders the men to nock their arrows…and hold. Joffrey is infuriated. But the men hold, even as a lone ship heads toward Stannis’ navy. When the time is right, Bronn lights an arrow and shoots it toward the ship. Davos (the hero on the Baratheon side) sees the ship is empty, but he sees, too late, that it’s carrying wildfire. The ship explodes, taking a chunk of Stannis’ navy, and Ser Davos’ son, Matthos, with it.

Blackwater Bay goes up in weird, green flames. It. Was. Awesome.

But Stannis still has strength in numbers, and he and his men row to shore to begin the conquest in earnest. (“Hundeds will die!” one of Stannis’ men says. “Thousands,” Stannis counters.)

Tyrion, not the sniveling boy king, is giving orders. Tyrion tells Sandor Clegane, a.k.a. the Hound, to greet the Baratheons personally. The scar-faced Hound does as he’s told, but not before warning an archer, “If any of those flaming fucking arrows come near me, I’ll strangle you with your own guts.” And as they’re meeting the invaders, he tells his men, “Any man dies with a clean sword, I’ll rape his fucking corpse.”

Stannis’ men invade, and there’s a lot of bloody sword work. Even the dainty Ser Lancel gets into the fray, but he leaves when he’s shot in the chest with an arrow. (I guess it was only a flesh wound.)

The battle lust that Sandor has relished is good to him…until he gets a whiff of the fire that burn wherever he looks. He’s soon unnerved, not by the killing but by the flames (in season 1, we learned his scars came courtesy of his brother, Gregor, a.k.a. the Mountain, who had held him down in a firepit).

Sandor tenders his resignation with four-letter words and leaves. But morale is about to take a turn for the worse: Ser Lancel arrives to tell Joffrey that his mother wants him off the wall and into safety. Joffrey orders his knight, Ser Mandon, to represent him on the field and flees. What a jerk.

It’s a make or break moment. Tyrion, surprising everyone, including himself, takes command. He tells the men that he plans to lead them in a different direction (through the tunnels, thanks to the map Varys had produced at beginning of the episode) and come out behind the invaders outside the Mudgate walls. He tells them that they need to fight, not for the king, but for themselves, their homes, their women. “Those are brave men knocking at our door. Let’s go kill them.” It works. And Tyrion, the “halfman,” leads an army into battle.

The soldiers of King’s Landing defeat Stannis’ men outside the gate, and the soldiers chant his name: “Halfman! Halfman!” We’re given about five seconds to think that maybe Tyrion has saved the city after all…then the main body of the army arrives. Stannis, determined to take the Iron Throne, he hacks his way through the home team, slicing off the top of a man’s head as he goes on his murderous way.

Tyrion finds himself facing one of Stannis’ knights—a tall, imposing, thy-doom-is-upon-thee figure. But wait, that’s not one of Stannis’ men. It’s Ser Mandon, Joffrey’s knight, who tries to kill Tyrion but only slashes him in the face. Tyrion’s squire, Podrick Payne, saves him and kills Mandon.

Did someone just try to assassinate Tyrion in the middle of a battle? Apparently so. But whose orders was Ser Mandon following?

Tyrion is semi-conscious during the best bits (a trick he perfected in the first season): in the chaos you might not realize that not more invaders, but another army comes up and starts cutting a swath through the Baratheons. Leading it on horseback is Renly’s lover, Ser Loras, who has allied himself with the Lannisters. The Lannister army repels the Baratheons, and Stannis dragged away by his men, even as he’s shouting, “Stand and fight!”

Tywin Lannister walks into the Throne Room, where he finds Cersei and her youngest son, Tommen. “The battle is over,” he says, “We have won.”

And that was just the main plot.

As for Sansa, Joffrey has ordered her to see him off and tells her to kiss his new sword, Hearteater. Although she can’t plainly tell him, “Go die in a fire,” she sweetly suggests that Joffrey lead the battle. She also tells Tyrion, “I will pray for your safe return, my lord…just as I pray for the king’s.”

Sansa and her servant Shae, who is also Tyrion’s lover, join Cersei and the rest of the noblewomen of the city in a holdfast. Sansa is discomfited to see Ser Ilyn Payne, the executioner who beheaded her father. Cersei tells her that he’s there to protect them when the guards eventually flee.

Meanwhile, Cersei pours drinks down Sansa’s throat and tells her some uncomfortable truths. And as the alcohol flows, these truths become downright chilling: That she should rule the people through fear. That she should use what’s between her legs to survive. That if the noblewomen are found by the soldiers, “These fine women should be in a for a bit of a rape.” And that Ser Ilyn will kill them all, rather than see that happen.

When Cersei learns from Lancel, who was shot in the chest by an arrow, that the battle is going poorly, she orders him to tell Joffrey to get to safety. When Lancel returns and tells her that he wants Joffrey to return to battle, she punches him in his wounded chest and flees, taking her youngest son, Tommen, with her.

Shae urges Sansa to hide from Ser Ilyn Payne—Stannis would keep her alive—so Sansa escapes the executioner’s watchful eye and runs to her room, where she finds her doll…and the Hound, who had fled the battle previously. Sandor, who is drunk with wine and fear, offers to take Sansa to Winterfell. But Sansa is obviously more afraid of the Hound than of Stannis. “You won’t hurt me,” she tells him. “No, little bird. I won’t hurt you,” he says and walks out. Sixteen-year-old actress Sophie Turner has never looked so beautiful or so adult as she did in this scene.

Cersei, in her only kind and sober moment in the episode, sits on the Iron Throne with Tommen in her lap and tells him a fairy tale and promises to keep him safe. Then she gives him a small bottle of poison that Grandmaester Pycelle (his beard shorn after Tyrion had it hacked off a few weeks ago) had given her at the beginning of the episode.

Just as she hands the bottle to Tommen, Tywin walks into the Throne Room. He hasn’t just saved the city. He’s saved his daughter and grandson too.

I loved “Blackwater,” a unique episode that was focused on King’s Landing, rather than tales spread throughout Westeros and Essos. While you don’t have to have read the second book in George R.R. Martin’s A Song of Ice and Fire series, A Clash of Kings, to enjoy the episode, there’s an important point that only a fan of the series in print will fully understand.

In the book, we learn that Ser Loras Tyrell, the lover of the late King Renly Baratheon, arrived at the battlefield dressed in Renly’s armor, which made Stannis’ army think that Renly wasn’t dead after all. Loras had allied himself with the Lannisters rather than bend the knee to Renly’s hated brother, Stannis.

Any other questions about the episode? Ask me in the comments. I’ve read the books, and I’ll answer as best as I can.

Episode 2.08, “The Prince of Winterfell”