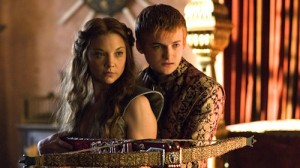 An epic romance between a boy and his crossbow.

A Storm of Swords, book three in the saga A Song of Ice and Fire, was such a large, sprawling epic that George R.R. Martin had to break it into two parts. Part 1: Steel and Snow is the base on which season 3 of Game of Thrones rests. But there are quite a few differences between what we’ve read and what we saw last night.

Instead of doing a write-through, I’ll be doing a comparison between what we read in the book and what we see on television. Which is better? That’s for you to decide. I provide the information. You provide the answer for yourselves.

Ask anyone who’s read the series. Jojen and Meera Reed appeared in the second book, A Clash of Kings. It was Jojen who foresaw the sack of Winterfell and Jojen who foresaw the survivors hiding in the Stark family crypt. While leaving Winterfell at the end of the book, a dying Maester Luwin tells Bran to head north with Jojen, Meera, and Hodor, while Osha takes little Rickon east.

Here, we finally met the Reeds, rather amusingly. While Jojen appears, Osha puts a spear to the back of his neck. Then Meera gets the drop on Osha. I didn’t think anyone could get the drop on Osha.

They stay that way until Osha tells Meera that Bran’s direwolf, Summer, will tear her to bits. Oh really? Jojen immediately makes friends with Bran’s furry companion. The party heads north together.

While they walk, Jojen and Bran talk about their gifts of sight and the ability to get inside the heads of animals while Osha asks Meera if Jojen is ashamed that his sister protects him, while Meera counters that some people need help, but it doesn’t mean they’re not worth helping.

It was a nice exchange…considering that Osha knows that the White Walkers are coming and in the book, she would never have agreed to go back north.

Robb and his wife Talisa (in the book, Jeyne) share a romantic exchange that never occurred on paper, and Lord Bolton—finally! the character we know to be Roose Bolton has been given a name!—brings bad tidings. His grandfather, Hoster Tully, is dead. A second letter brings equally bad news. By the time Bolton’s bastard arrived in Winterfell, the Iron Isles raiders were gone.

We know from the books that the Ironborn may have gone home, but Theon was left behind…in the not-so-tender mercies of Ramsay, the Bastard of Bolton.

Well, I was afraid of this. In the books, we know anecdotally that Theon was tortured and his torture wasn’t brief. But now, we’re seeing it unfold. Egads. Just…egads.

But there’s hope. Theon’s sister has an ally in Bolton’s camp. Yara’s man promises he’ll release Theon that evening. He leaves, even though Theon begs him not to.

Talisa also shares a wonderful scene with Catelyn that never appears in the books. While making a prayer wheel for her sons, Cat tells her daughter-in-law that she had cared for Jon Snow when he was dying of the pox and that she had promised the gods that if he lived, she would treat him as a son. She would even ask Ned to give the bastard their family name. But when he lived, she couldn’t keep her promise. “And everything that’s happened since then, all of this horror that’s come to my family, it’s all because I couldn’t love a motherless child.”

Seven Gods, what a pity that Hoster Tully, her father, had died off-screen. They had had a wonderfully strange exchange when he was dying. Hoster calls her “Tansy” and deliriously tries to comfort her by saying, “You’ll have others…sweet babes and trueborn.” What does this mean? You’ll have to read the books for the mind-blowing answer.

We know that Jaime is calculating from season 2, when he killed his cousin as a means to escape imprisonment. Still in chains, when they encounter a traveler on the road, Jaime wants Brienne to kill him, to prevent him from talking. The honorable Brienne refuses.