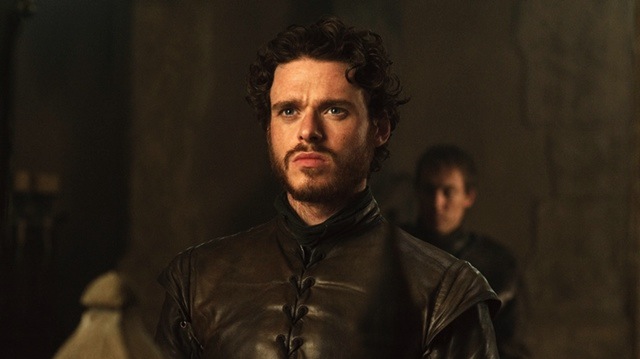 Game of Thrones may be a great HBO television show, but first it was a great series of books, A Song of Ice and Fire, by George R.R. Martin. The events of the season 3 in the television show are following book 3, A Storm of Swords, part 1. But which is better? Let’s take a look at “Walk of Punishment” and see. It's good to be the king.

We first see Robb Stark with his family at his grandfather’s funeral. Here we meet his uncle Edmure and his great-uncle Brynden, known as the Blackfish. Edmure, we learn, is rash and unskilled; Brynden is the opposite. Robb quickly dresses down Edmure for foiling his plans against the Hound, and for not having patience, a trait that the Lannisters have in abundance.

Robb’s wife, Talisa, who had been a healer, puts her talents to use on captives of Robb’s, Willem and Martin Lannister, young boys who believe the tales that Robb turns into a flesh-eating wolf at night. He doesn’t eat children, Talisa tells them, except during a full moon. “It’s not a full moon tonight, is it?” she asks a guard casually.

Book vs. TV show: Edmure did indeed foil Robb’s plans for the Hound and the Lannisters, but it had taken place in book 2 of the series, A Clash of Kings. The rest is the work of the screenwriters.

Winner: The TV show. The scene with Talisa was quick but amusing; the scene with Catelyn and Brynden, touching.

When the King’s “Small Council” meets, Petyr, Varys, Cersei, and Tyrion all play a “game of chairs”, each of them vying to get closest to Tywin. (Ultimately, Tyrion places himself at the foot of the table, dragging a chair as he does.) In short order, Petyr, the new Lord of Harrenhal, has been dispatched to marry Lysa Arryn, “to bring her into the fold”…and Tyrion has been named the Master of Coin.

Tyrion takes the Westeros account books from Littlefinger, who naturally keeps it in his brothel. His squire, Podrick Payne, finds it hard to concentrate, what with Ros’ charms distracting him. Tyrion decides to reward Pod for preventing his assassination last season with three well-paid whores. Tyrion suggests, “Pace yourself, lad.”

Tyrion goes over the Westeros account books and discovers that Littlefinger was good not at earning money but at borrowing it. Now the crown owes millions of gold coins to the Iron Bank of Braavos. Not good.

Pod returns from the brothel with the sack of coins that Tyrion had given him. Oh, he had availed the prostitutes of their services. But it seems they hadn’t taken his coin. What could Pod had possibly done that would make the women turn down the gold? Tyrion and Bronn demand copious details.

Book vs. TV show: As in the book, there is a “scramble for seats;” Tyrion is named Master of Coin; and Littlefinger is sent out to seduce Lysa Arryn. The rest does not happen.

Winner: In the first scene, the TV show, which is played to comedic perfection here, wins. Plus, Varys manages to point out that since Harrenhal is under control of their enemies, Petyr isn’t actually the Lord of Harrenhal at the moment. Burn!

As for the rest, any scene with Peter Dinklage is a winner, but it did little to forward the story arc.

Jon and Mance Rayder, the King Beyond the Wall, see that White Walkers had dismembered horses and laid them out in a spiral pattern. As one of Mance’s men had foreseen that the Night’s Watch were dead, Mance sees this as an opportunity to climb the Wall and storm Castle Black. Mance tells his buddy Tormund to take Jon Snow with a small party of radiers. “If he’s useful, good. If not, throw him off the Wall. See if crows can fly.”

Book vs. TV show: The White Walkers aren’t creatures who artfully disassemble horses. They’re ghouls. Also, the way that Jon and Mance relate to each other is very different in the books. Without giving too much away, Mance had once been to Winterfell. I think Mance trusts Jon a little more in the books—as much as the King of the Wildlings can trust an unproven Crow.

Winner: The books. There, we get to see the culture and the unwritten rules of the Free Folk. Here, they’re just Mance’s yes-men. It's better to be the queen.

Dany, Ser Jorah Mormont and her newest advisor, Ser Barristan Selmy are walking in Astapor, strolling across a walkway decorated in the local version of crucifixion—”the walk of punishment”  for slaves. Dany tries to help one of the dying slaves, but no, he prefers death.

Her men offer difficult and conflicting advice. Jorah wants her to purchase the Unsullied, who would not rape or pillage after battle. Barristan does not agree and says that men followed her brother Rhaegar because they believed in him, not because they’d be bought. Jorah counters: “Rhaegar fought valiantly. Rhaegar fought nobly. And Rhaegar died.”

Dany returns to the slaver Kraznys and tells him, through his interpreter Missandei, she wants to buy every single Unsullied, even the untrained ones. In exchange, she will give him one of her dragons.

And with that, Dany has sold one dragon in exchange for an army.

Books vs. TV show: When Dany offers her dragon in the episode, both Barristan and Jorah protest, however, in the books, Barristan protests first and loudly, so Dany orders Jorah to lead him out. Unlike the books, Daenerys tells Kraznys to give Missandei to her as a gift, whereas in print, the slaver offers Missandei as an interpreter for the Unsullied.

Winner: Tie. Much of the dialog in these scenes were taken from the book, although some of Kraznys’ more entertainingly crude statements about Dany were dumbed down in the episode. But I like how Dany assures Missandei in the episode that all men must die, “but we are not men.” Sam and the remaining Night’s Watch appear at Craster’s Keep, looking for food and shelter. Craster gives them a little food, grudgingly. Gilly, the pregnant girl from season 2, is giving birth, and the ever-civilized Craster order one of his wives to tell her, “She can bite down on a rag or she can bite down on my fist.”

Craster then tells the others to dine on the overweight Sam.

Disliking the direction in which the conversation is taking, Sam leaves to find Gilly. She finally gives birth to a boy. And we all know what Craster does with his boys. (He hands them over to the White Walkers, that’s what.)

Books vs. TV show: Many of the lines and events here in the episode are taken directly from the book.

Winner: The TV show, by a hair, because of the TV writers’ twisted addition of cannibalism. I didn’t see that coming, but that line is perfectly Craster.

Arya and her friends Gendry and Hot Pie are now “guests” of the Brotherhood Without Banners…not that they’re free to go. The Hound is an all-out prisoner, and he’s led, head covered, into a wagon. Watch out, Hound, or else your head will get thwac—too late. As they head out, Hot Pie has decided to stay at the inn. He’s made Arya some bread in the (mis)shape of a House Stark’s wolf as a farewell gift.

Although the scenes with Stannis are usually in Stannis’ point of view, we have absolutely shifted to the Red Priestess in this scene. Melisandre has a mission to attend to, one that she won’t reveal to Stannis. Stannis pleads with her to stay and give him another son, but she won’t. “You will sit on the Iron Throne,” she says, “but first there must be sacrifices.” What kind of sacrifices? Her magic requires a king’s blood. And he’s not the only Baratheon left.

Books vs. TV show: In the books, her magic requires “the blood of a king,” and as there are many people who claim the crown of Westeros, it seems that many people are in danger of Melisandre’s sorcery. As we know in the books, one of the few living Baratheons left is Edric Storm, Robert Baratheon’s only acknowledged bastard. It’s Edric that Melisandre is gunning after.

Winner: None. Melisandre isn’t a very full-fledged character, either here or in the first few books, and her plans aren’t engaging to me. Her actions, yes, but her plans? I’ll wait for her next move before I get excited. Theon escapes from his prison with the help of a man in his sister Yara’s employ. The man gives Theon a horse and tells him to ride East, where Yara will be waiting. Theon rides East, but instead of Yara, he sees guards. They capture him…a try to rape him. Lucky for Theon, the man who helped him escape arrives and kills all the guards. He leads Theon away.

Books vs. TV show: None of the events here occur in the book but are referred to obliquely as something that had happened in the past. Therefore, the TV show wins.

Jaime Lannister and Brienne have been taken captive by the Brave Companions and tied up together. Jaime warns Brienne that—to coin a phrase from Cersei from last season—she’s in for a bit of a rape. He urges her not to fight them, or else she’ll be killed.

That night, Brienne is led off by three men, and we hear her screams in the distance. Jaime, who for the very first time in the series acts the way we think a knight should act, defends Brienne by telling their main kidnapper that she comes from Tarth, the Sapphire Isles, and that she’s worth her weight in gemstones should she be returned to her father unharmed. She’s returned unscathed.

Jaime confers with the kidnapper and thinks he’s made an ally. But the kidnapper suddenly turns vicious. In a move that you couldn’t have seen coming, he cuts off Jaime’s right hand.

Book vs. TV show: Most of what happens in the books happens here, with a few differences. We learn in the books that Jaime had lied: The Sapphire Isles are named for the color of the water, though, not the Isles’ riches. The main kidnapper has a name, Vargo Hoat, who is sworn to Roose Bolton. Vargo didn’t maim the Kingslayer himself; he had a Dothraki sellsword do it for him.

Winner: The book. What happens in the TV show is well-plotted, whereas the scenes in the book are somewhat scattered. But in the book, Hoat’s men, the Brave Companions, are about as vicious and frightening as they come, and I feared them in a way I don’t fear the rape-kill-pillage caricatures of the TV show. Also, when Jaime was captured, he had refused to scream. But when the Dothraki took his hand, he could not help himself. It was an extremely well-written scene.

The fewer characters in each episode of Game of Thrones, the better the episode is. I’m saying this not because I don’t love Sansa or Bran or Davos, who didn’t appear in “Walk of Punishment.” I’m saying this because I love them so much that I want to see more of them. If the HBO show is flawed, it’s because there are too many characters, all of whom are marvelous, and it’s bothersome to see them in bits and pieces, rather than an hour-long show dedicated to each and every one of them. Game of Thrones is almost too good for its own good.

Except for the rape. Seriously, both Brienne and freakin’ Theon are threatened with rape, as well as entire cities, if Daenerys hires vicious sellswords. In season 1, we had an incest count. Here, we have a rape count. Egads.