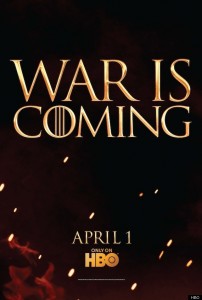 Have you ever seen a trailer and thought, “I’m going to freakin’ die from anticipation?” That’s the thought that Game of Thrones fans are going to have when you see this season 2 trailer. HBO’s hit show has it all: politics, treachery, dragons, and Tyrion Lannister. If the anticipation doesn’t kill me, I’m sure the first moment I lay my eyes on Tyrion on season 2 will.

The only thing missing from this trailer is a hint of the circuitous journey that young Arya Stark is about to take. I would say that she deserves an entire series of her own…but then again, I can say that about most of the other protagonists in Game of Thrones.

If you haven’t seen season 1, you can catch up in March, when iTunes (finally) makes Game of Thrones available. Or better yet, read George R.R. Martins’ extraordinary series-in-progress.