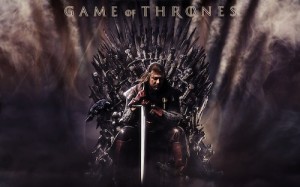 Winter is coming. No one knows this better than Ned Stark.

Don Draper, winter is coming. Although the dashing Mr. Draper is frequently concerned with identity and the dark pockets of the human heart, he needs be even more concerned about HBO’s Game of Thrones. Mad Men’s world is a cut-throat business, but it’s losing out to actual cutting of throats: According to the New York Times, GoT pulled in one million more viewers with its 2013 season debut.

Perhaps viewers appreciate a show based on a series of books that has not dumbed down its source material. The compromises made seem like ones based on squeezing George R.R. Martin’s sprawling epic, A Song of Ice and Fire, into something that will fit on a TV screen, rather than catering to a broader audience. It turns out that sticking to the source and not diverging from it is a winning strategy, and it’s good to see that producers David Benioff and D.B. White recognize that people like the books because they are good. (Who’d have thought?)

Does that mean the bloom off the rose on Madison Ave? Not necessarily. The AMC show has been growing its audience steadily year after year, from 0.9 million viewers for its season 1 premiere, all the way to its season 5 premiere heights. The dip in its season 6 premiere numbers is a slender one.

However, having seen the season 6 premiere, I suspect this downward turn will continue. Mad Men, unfortunately, isn’t staying true to its roots: Although the show has kept the moodiness that made season 1 so compelling, it’s been drained of its wit. Where are the scenes where Sally comes into the room with a plastic bag over her head and Betty yells at her for wrinkling the dry cleaning? Or where the Drapers go on a family picnic and leave their garbage behind. It was the shock of watching 1950s, then 1960s, values (complete with sexism) clash with our 21st century political correctness, that made the show hilarious to watch.

Continual evolution is important for a show to stay fresh, and in GoT the tides turn as frequently as the tide. Readers of Martin’s in-progress saga, will already be quite familiar with the slew of characters and changes of fortune the TV audience has yet to experience. The writers’ difficult task is fitting such a huge plot into hour-long slots.

Mad Men, though, in seeking to renew itself, has lost or discarded its sense of humor, that wit that made it so watchable, and the show is poorer for it. Now it’s just callous and bitter, like a once-dominant brand being sidelined by newcomers it has no idea how to counter. Don Draper’s writers should know: Brand building is essential, but you’ve got to stay on message if you want to make an impact.