‘Game of Thrones’: What to Look Forward to in Season 2 (minor spoilers) 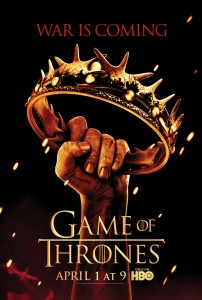 Last week I wrote a spoiler-free article as to why you should watch the first season of Game of Thrones. But if you have seen season 1 of the HBO series, and you’re eagerly anticipating season 2, I’d like to share a tiny bit of what you have to look forward to. I’m offering only minor spoilers…and major generalizations.

In fact, I promise I won’t reveal anything world-turning for one important reason: I haven’t seen the upcoming season. But I’ve read the books, so I, and everyone else who’s read George R.R. Martin’s A Clash of Kings, book two of the Song of Ice and Fire series, have a pretty good idea of things to come.

Here’s are a few things you have to look forward to:

There are kings, and they will clash

– We’ve already met Renly, the late King Robert’s youngest brother; in the first season, he tried for a grab at the throne, but Ned rebuffed his plans…and we all know how well that worked out for Ned. Now Renly is actively pursuing a claim, with the army of House Tyrell at his back, along with his new wife and his lover (who happens to be his wife’s brother).

– We also know Robb Stark, Ned’s eldest son, who was proclaimed King of the North. He has a small army too, as well as a valuable hostage (Jaime Lannister).

– Then there’s Renly’s elder brother, Stannis. Stannis is unbending, unyielding, and generally unlikeable. He has an army of his own, but more importantly, he has one particularly pwerful ally: Melisandre, a priestess of a fire god (R’hllor) from a distant land.

– As for the fourth contender, you’ll have to be surprised. But you won’t be surprised that he also has an army.

Keep in mind these pretend kings aren’t just fighting Joffrey; they’re also at war with each other.

There are some heart-stopping betrayals that take place in the upcoming season. (A precursor to even more betrayals in later books.) As in the first season, characters that you thought were allies turn out to be loyal only to their own interests. Now these betrayals are even more violent and have even greater repercussions.