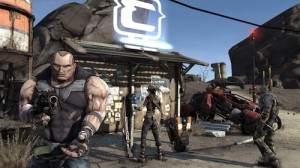 I love a good soundtrack. My iPhone is filled to the brim with music from John Williams, James Horner, and Bear McCreary. I love the transformative power of soundtracks: One minute, I’m at the grocery store shopping for spaghetti sauce, and the next I’m on the Enterprise, under attack from the Reliant. When the cashier asks me, “Would you like paper or plastic?” I answer, “Khaaaaan! And, um, paper.”

Then there are the videogame soundtracks. They’re harder to listen to in the grocery store or on the streets of New York City, because I’m not merely transported to the United Federation of Planets. I’m sent on a mission to destroy alien invaders. When I’m walking, my hands are fluttering around a gamepad that isn’t there, spelling out “Me love you long time” in American Sign Language.

But sadly, these fabulous orchestral soundtracks aren’t music that I can dance to. I can listen, I can enjoy thoroughly, but I can’t dance. And dancing is a pleasure that I love to indulge. So even though I can honestly say the soundtracks to Prince of Persia and the Myst series are lovely–and the theme to Plants vs. Zombies is cute and catchy as hell–my favorite game music comes with a beat. My second favorite game music? That’d be music with terrific lyrics.

Here are my favorites in a few different categories:

Best Lyrics: “Still Alive” (Portal)
This song was written by Jonathan Coulton specifically for Portal, an inventive first-person puzzler. The opening line, “This is a triumph,” always reminds me of my victory over GLaDOS, a computer so devious that you can’t 100% confirm she’s the enemy until she springs it on you, 9/10ths of the way through the game. Yet one of the lines in “Still Alive” (sung by the opera singer Ellen McLain), “I’m not even angry, I’m being so sincere right now,” won me over to GLaDOS’ side. By the end of the song, I was cheering for the evil computer’s ability to stay alive to eventually triumph over me. That’s pure awesome.

Best overall soundtrack: Grand Theft Auto IV
I’m not much of a GTA player, cuz I’d like to think my cocaine-fueled, hooker-slapping days are behind me, but I have to recommend the music for two important reason. 1) The music is slammin’, and 2) The game itself is open world…and so is the soundtrack. This means that when I’m, I mean, my character is cruising in his car for hookers and coke, I can change the channel whenever I want to.

My favorite radio station was Vladivostok, the Russian language channel. (If you recall, our protagonist is from an unnamed Eastern European country.) Vladivostok covers multiple genres, including rock, hip hop, and pop. But of all the songs, I loved this one the hardest:  Zelenoglazoe Taksi by Oleg Kvasha.