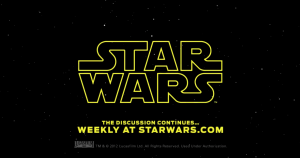 StarWars.com has released its second video based on an interview with George Lucas, the former CEO of Lucasfilm, and Kathleen Kennedy, the heir to the empire. In the newest video, Lucas and Kennedy give us a little more insight into who will be bringing the galaxy far, far away just a little bit closer. It turns out that only Star Wars fans need apply.

In this video, below, when asked what she is looking for in a director, Kennedy said, “It’s not going to be people who don’t already have some affinity for Star Wars, probably. It’s going to be somebody who really appreciates what Star Wars meant to them and is excited to dive in and be a part of this. That’s the thing that I think will be immediately apparent are the directors who walk into the room and say, ‘I can’t wait to be a part of this.’”

Lucas will act as the creative consultant, to fill in the blanks when necessary. He and Kennedy see his role as “the keeper of the flame.”

Kennedy says she intends to look at people with whom she has worked in the past. As her IMDB page tells it, that’s at least half of Hollywood.

“I think it’s going to be a pretty long list,” she said.