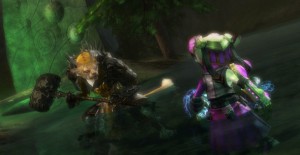 Guild Wars 2 (GW2) has had some wonderful successes since it’s launch in August 28, 2012. It won Time magazine’s Game of the Year, multiple Best MMO awards, and—obvious to those who have played it—awards for its lovely art direction. Now GW2 can add another feat onto the pile: ArenaNet has sold 3 million copies of their subscription-free game.

With the news comes an announcement from GW2 game director, Colin Johanson, about the year ahead, as well as a video, below.

– Server transfers…for a fee.  “[W]e’ll be adding paid server transfers, with time limitations and WvW restrictions, and guesting ability, which allows players to visit friends on other servers in every part of the game except for WvW.” (Finally.)
– More PvP training. Also, “We’ll be adding systems that make it easier for players who are less competitive to get matched only against people with similar skill sets.”

– The achievement system will be expanded. “We’ll add tokens for your achievement you can turn in to select from a list of rewards, including new reward types like ascended gear and infusions.”

– Achievements that are different each day of the week. And “Later, we’ll also be adding a system that lets you complete a subgroup of achievements to fulfill your daily. For example, if there are 6 daily achievements available, you’ll only need to do 4 of the 6.  So you can choose the achievements that you’re most interested in.”

– And considering the scope of this ever-expanding game, “Improving the new player experience, to make it easier for new players to learn how to play GW2, enter the game world, and more quickly learn the game without being overwhelmed.”

It’s unsurprising that GW2 has become as popular as it is. One of the not-so-secret secrets of their success is new content. While World of Warcraft releases expansions infrequently (there was a two-year lag between “Cataclysm” and “Mists of Pandaria”), GW2 releases game-wide events that add new enemies, new puzzles, and best of all, new loot. In fact, GW2 has been releasing them monthly, starting in October 2012. (GW2’s site says that there’s a January event “coming soon,” but the details are currently locked.)

And then there was the invite-a-friend weekend, which let players bring three friends to Tyria. Obviously, a few of those friends decided to stay.