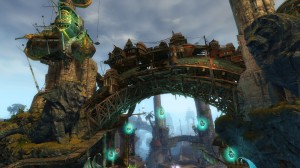 If you want a jaw-droppingly gorgeous MMO, look no further than Guild Wars 2 (GW2), ArenaNet’s newest creation. The beauty of the world of Tyria is even apparent during combat, where effects include illusions that dissolve into a swirl of butterflies and a field effect that resembles opaque circles of puzzle pieces. Emerging from a lake beads your monitor with droplets of water. The capital cities of the five playable races are a visual tour-de-force, especially the human Divinity’s Reach, which makes Minas Tirith look like a hill fort. And the landscapes, oh the landscapes. GW2 is simply lovely to look at.

If you want a game that will always challenge you, GW2 is up to challenging. You can fill a George R.R. Martin-sized saga with all the tasks you’ll have to accomplish.  Add to this your own personal storyline, and you will never have a dull moment.

Some of the challenges include jumping puzzles, which can lead to pretty viewpoints a la Assassin’s Creed or unmarked mini-dungeons. This game rewards you for being curious, and there are genuine surprises to be found if you take your time and don’t rush from one quest to the next.

And if you don’t want to spend your time perpetually locked in the throes of mortal combat, GW2 is also your game. Although combat is a major part of GW2, it’s only one of many experience-gaining options that will lead you toward the top echelon of level 80. GW2 rewards you for gathering materials, crafting (both making known recipes/items and discovering new ones), for exploration, for scaling often-treacherous footpaths in order to find yet another spectacular view.

There really is something here for every gamer. Here’s why:

GW2′s character creator is fairly sophisticated and gives you a great deal of control over your character’s appearance. You can choose from five races–human, sylvari (elvish plant people), asura (think Brain from Pinky and the Brain), norn (giant warrior types), and charr (think Kzinti/Kilrathi)–and choosing hair styles, eye shape, and clothing color gleefully occupied many hours and much brain space. I chose a sylvari at first, then I dabbled with an asura, a race of technology-minded golem builders whose homeland looks like 16th century steampunk. Even though the asura look like something I shouldn’t feed after midnight, their dialog was snappy and snarky, just my style.

You can choose from one of eight professions: engineer, warrior, necromancer, thief, elementalist, mesmer, ranger, and guardian. Refreshingly, there are no bonuses/penalties for race, which means you can be an asura warrior or a norn engineer, rather than the other way around. Although you can unlock skills that are determined by your race, these are balanced and confer no major advantages to any player.

You then give your character a background and circumstance that plays into their personal storyline, which means a poor man who doesn’t know his lineage will have a different storyline than a wealthy noblewoman. You get to make choices that effect your character’s outcome, and there seems to be no wrong decisions. (More on this later.)