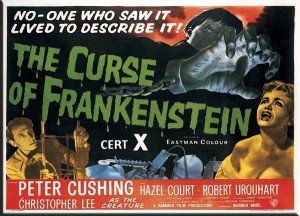 There’s a reason that UK film company Hammer Film Productions is known as “the studio that dripped blood.” In its 1955-1974 heyday, its main output consisted of public-domain monsters wreaking havoc in glorious Technicolor. Now Hammer, the film company that made Christopher Lee and Peter Cushing household names (in some very creepy households, that is), needs your help with some more frights.

According to the BBC, Hammer lost some of their most graphic scenes when they were deleted by UK censors. However, Hammer has a reason to believe these scenes may still exist: uncut versions of these movies were sent overseas.

The film studio has identified nine missing scenes from six of its best-known films that it is hoping to find.

One of the most sought-after clips is a scene in 1957′s The Curse of Frankenstein, where a severed head is apparently dropped into a vat of acid.

In addition to The Curse of Frankenstein, the movies that Hammer have identified as having missing footage are The Reptile, The Mummy, Frankenstein and the Monster from Hell, Rasputin: the Mad Monk, and The Viking Queen. Missing footage includes “glass in throat” and “body falling into grave” scenes.

Currently, Hammer only has photographs of these scenes, which were taken during filming.

Films that were considered “lost” occasionally crop up from the private collections of film enthusiasts or found in unlabeled archives. But many films, particularly older ones that were either deliberately destroyed as valueless or unintentionally destroyed in fires, will be lost for good.

Still, if you checked your private collection, your library, or your film studio archives for the above movies, Hammer would be very grateful.

After being dormant for decades, Hammer’s back catalog was acquired by Dutch producer John De Mol in 2007. Its first film under new management was The Woman in Black, a January release that starring Daniel Radcliffe in his first post-Harry Potter role. Production for The Woman in Black cost $13 million; the movie has currently earned almost $90 million.