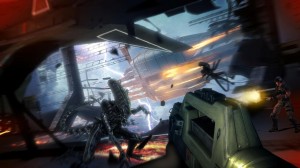 I learned quite a few things at the Aliens: Colonial Marines (A:CM) press event, held for journos eager to get their hands on the upcoming FPS. I learned that the game itself is content complete and Gearbox is just polishing the game for its February release date. I learned that Aliens star Michael Biehn is also contributing a voiceover. And I learned that Lance Henriksen is as deadpan in person as he is on screen. (He also told us twenty people “have walked up to me and said, ‘I became a Marine because of Aliens.’”) Lance Henrikesen, mugging for the camera

Better yet, I got my eager mitts on the multiplayer mode, where I took on the xenomorphs. Holy crap, I died a lot. More on that in a minute.

In A:CM, an official sequel to the Aliens saga, we play Corporal Winter, one of the four hundred Marines dispatched to learn the whereabouts of the Marines stranded on LV-426. Did I say four hundred? Actually, the majority will die in appalling ways. I know this because Randy Pitchford, CEO of Gearbox, called them “redshirts.”

We saw two scenes from the single player campaign, played in real time in front of us. The first scene takes place on the surface of LV-426, or rather, what’s left of it after the atmospheric processor blew its stack. Parts of it are still on fire seventeen weeks later, when our ship, Sephora, arrives on the scene. Details picked up from the movie–the abandoned armored personnel outside the doors of Hadley’s Hope, pieces of crashed dropship–were perfectly realized.

We stepped into what’s left of the shake-n-bake colony and headed for the operations center. This part is moody and taut, but not yet full of action. Pitchford said that Gearbox wanted to capture not only the intense combat but also the lull before the storm. It worked. I didn’t know when or where it would happen, but I knew that someone’s spine would be ripped out at any second. Probably mine.

We passed through the medical facility, and the attention to details is so exact that you can see the bed under which Ripley and Newt slept and the remains of the facehugger that Hicks dispatched.

Because we’ve seen Aliens, we know about the lifecycle of the xenomorphs and have more context than these Marines do. Not to worry, the xenomorphs quickly arrive to fill in the knowledge gap. Pity those sentry guns in Aliens ran out of bullets.

The second scene takes place on the Sulaco, the ship that Ripley and co. arrived and left LV-426 on. (Background: The Sulaco had left the planet at the end of Aliens and had ejected Ripley, Newt, and Hicks in the intro to Alien 3. Now it’s unaccountably back in orbit around LV-426. As far as we know, the Marines have no idea it had ever left.) As we explore the Sulaco, we encounter Weyland-Yutani mercs. Cue three-way fights between the Marines, the company, and the aliens.

Uh-oh. We’ve got explosive decompression. The ship’s computer lets us know a hull breach is imminent and suggests the benefits that minimum safe distance has to offer. The music adapts to the situation here, though the continually urgent klaxon in the background gets in the way.

The Sulaco, like all military bases everywhere, has the usual collection of ammo and health power-ups semi-randomly strewn around. Rather large ones, too. You’re absolutely not going to overlook them.