Has ‘Guild Wars 2′ Become Too Complicated? 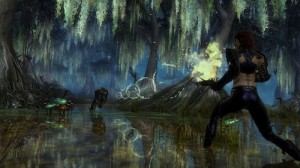 When Guild Wars 2 (GW2) came out, I jumped into it enthusiastically and played for several weeks. But life happens, as it does, and I’ve been only able to venture into Tyria intermittently. When I did play, I noticed changes, but I didn’t spend much time examining them. So recently I returned to explore the wealth of new material. And I walked away with the question: Is too much of a good thing still too much?

Within the first few hours of gameplay in the original release, I had a firm grasp on GW2’s gameplay, even though I had never really spent much time in MMOs before. This iteration of GW2 is more of the same: more feature-rich, more complex…and more complicated.

When I returned, I found multiple new forms of currency, a whole new map zone, the new Fractal dungeons in which your character “levels up” to more difficult iterations, and “Ascended” items that took multiple, time-consuming tasks to build.

There are also Heralds, who point the way to current events (they go hand-in-hand with GW2′s new “Living Story”), and Laurel vendors, who provide an alternate means to buy Ascended items for those who don’t want to explore Fractals. For PvP fans, there’s a new arena that finally breaks away from the “capture point” model of the previous four (if not very far). And thankfully, there are  many minor tweaks and improvements, including the ability to bank special event collectibles.

I spoke on the telephone with Isaiah Cartwright, GW2’s lead designer, about the dungeons and currencies, and most recently, the addition of the guild system.

Tell me about the new additions to GW2.

We’ve been reworking on a lot of rewards and giving people lots of goals and achievements to accomplish. We’ve redone the daily system. We added currencies. And we made a new dungeon type called the Fractals of the Mist.

Probably been the biggest change that you’d see when coming back: We’ve been improving the rewards and balance of people’s time versus the things they get out of it.

Why have there been so many additions to the game?

As we were looking at the play patterns of players, we noticed they were getting through the last step of progression in our game faster than we wanted them to. That would lead them to run out of things to accomplish. We didn’t want to get into a gear-grind scenario, so what we did was add a new tier rarity called “Ascended items.” We wanted to add a step in there to ensure that people had a lot to do.

We have somewhere around ten to fifteen currencies in the game right now. There are two main types, basic currencies and tokens. Basic currencies are gold, karma, the new laurels that we added, glory. They exist with you in your inventory at the bottom [of your UI]. The second type of currency we have are tokens. We use tokens in a number of different places, like the dungeons; they each have their own tokens. They show that you’ve beaten this dungeon.

We try to use currencies to split up the goals of players so that they want to do each of the different game types in different ways in order to earn the things they’d like to earn.

There have also been changes to the daily system. Before, you had to complete a set number of tasks in a day (completed dynamic events, plants gathered, etc). What’s changed?

We give you an option of like eight to ten [goals, such as killing enemies underwater or reviving other players and NPCs], and you get to pick five that you want to accomplish. So if you don’t like doing dungeons, you don’t have to choose it.

It only takes twenty to thirty minutes to accomplish these things, and it gives people a taste of different types of content. We try to kind of mix it up to encourage players to go to different maps and try different things out. We feel our system is the most robust one.

Tell me about the guild system.

We really wanted to make a system to encourage guilds to get together and play together. It can really help make a guild tighter knit and just enjoy the game together. And so we built these guild missions that you can go on, and we made a variety of different tiers and systems for them to go through.

Because the game is very large and there are lots of different types of guilds, we were looking at systems to make sure smaller guilds and larger guilds can kind of compete in the same space. It’s obviously a difficult challenge to do, because when there’s a lot more people in a guild, they have a lot more resources, people to organize themselves and those types of things. So we build a couple of systems in there to help us limit that.

We made all the guild content on weekly rewards, and we find that longer lock-out timers like that really help the smaller guilds catch up, because what the bigger guilds can do really, really quickly, the smaller guilds take a bit longer to do. We know there was an initial influence cost that was very high that a lot of smaller guilds weren’t able to get into it, so we’re looking at ways that we can improve that, make smaller guilds more able to compete on the influence gathering area.