How Fast Can You Name the Dwarves in ‘The Hobbit?’ (Not as Fast as Aidan Turner) 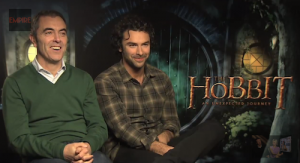 If you’re a fan of geeky trivia—and if you’re reading this, you probably are—you take pride in knowing obscure facts. Like the names of the thirteen dwarves in The Hobbit. Of course, you know it’s Thorin, Balin, Dwalin, Bifur, Bofur, Bombur, Oin, Gloin, Dori, Nori, Ori, Fili, and Kili. Ah, but can you list them quickly?

Empire Magazine recently asked several members of the cast, plus director Peter Jackson, to name all of the dwarves who appear in the recently released movie. Let’s just say that some people were quicker than others. Aidan Turner, who plays the dwarf Kili, is the quickest of them all.

It turns out that Turner, who had recused himself from the part of John Mitchell in the UK version of Being Human for a role in Jackson‘s epic, is a huge Doctor Who fan. One can therefore assume that geekiness is in his veins.

Check out the video. And for entertainment’s sake, check out how Sir Ian McKellen stacks up against the pro: