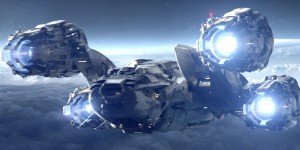 If you want to know how a science fiction film approaches its science or even its mood, you need only look at its spaceships.

In Firefly, the universe (or “’verse”) had underdeveloped, underfunded colonies, while the ship Serenity was kludged from scavenged parts. The science-minded 2001 was about a mission to Jupiter, and the ship Discovery One generated its own gravity through a centrifuge. And in Sunshine, about a mission to reboot the Sun, director Danny Boyle chose the name of the heavily shielded ship, Icarus II, to evoke a sense of hopelessness.

At first glance, Prometheus’ looks bears a passing resemblance to the Nostromo, the refinery-towing space tug in Alien, Ridley Scott’s first outing in the Aliens universe. That would make sense, as Weyland (later Weyland-Yutani) designed both ships, with Prometheus presumably being the progenitor of much of the Company’s future spacecraft engineering.

However, Nostromo was a workhorse, primarily designed to be hitched to whatever business assets needs moving around Weyland-Yutani’s empire, with landing a secondary concern at best. Prometheus isn’t having any of that: it’s designed for exploration and planetfall from the get-go and has the maneuverability to handle tricky environments.

The real-world production designer of the fictional ship Prometheus, Arthur Max said, “We tried to design a ship that wasn’t just an interplanetary taxi but more of a state-of-the-art expedition flagship.” In other words, the fictional owner of the Prometheus, Peter Weyland, didn’t spare the expense in the ship’s look and feel. As we see, it’s a beautiful ship, full of comfort and convenience for the explorers aboard.

What does this say about the kind of science fiction film that Prometheus is? It means that it’s gorgeous, ultramodern, and ready for anything (unlike poor Nostromo).

But we can’t get too comfortable, because it can take off when we least expect it.