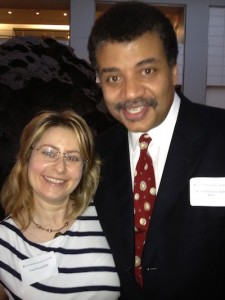 There’s a geek-girl controversy going on here at Forbes, thanks to an article by my fellow blogger, Tara Tiger Brown, who wrote a piece on fake geek girls. She wrote, “We just need to expose the posers for who they are and shine the light much more brightly on those that are the real deal.” But I say that we don’t need to tell faux geek girls to get off our geeky lawn.

I’ve never met a pseudo geek, not once in my life…and I’ve made a lifelong study of science fiction culture. What we’re seeing here is a misnomer: people who call themselves geeks because they feel awkward or because they once read a comic book and saw the movie it was based on. But that’s not geekhood.

As a professional geek girl, let me tell you how it’s done.

I’ve written before about why some people read science fiction—the tree that geek culture branches from—and why others ignore it. There were some themes that cropped up.

A few years ago, I noticed that my interviewees tended to have had “alienated” childhoods, that is, they felt removed from the people around them. (Some moved a lot, some suffered from illness, some were raised between two different cultures.)

Most interesting, I learned that many science fiction readers are Rationals in the Keirsey Temperament Sorter, which tells me that geekdom is as innate as left-handedness.

(Also, anecdotally, many were left-handed.)

If you think that you’re geeky because you once played a marathon game of Warcraft, and you’ve had a tumultuous childhood, well, maybe you are. And if that makes you feel happy, rather than awkward and embarrassed, then you definitely are.

If you’re not really a geek and that marathon session of Warcraft was a one-off, the phase will pass, and you’ll find some other hobby to embrace. The true geeks–and we know who we are–will stay right here.