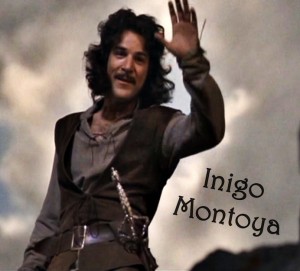 Who could be intimidated by this?

My name is Carol Pinchefsky. You wounded my soul when you asked Wynand Mullins to remove his t-shirt. Prepare to cry. At least, that’s what I wanted to do when I had read the following tale: It seems that a man aboard a Quantas flight last week was asked to remove his t-shirt because it bore an unsettling quote.

The quote, which appeared in the 1987 movie, The Princess Bride, and in the novel by William Goldman (which you should read, because it’s wonderful) on which it is based: “Hello. My name is Inigo Montoya. You killed my father. Prepare to die.”

Wynand Mullins of New Zealand told Stuff Magazine that he was asked to remove his T-shirt because other airline passengers found it intimidating.

In The Princess Bride, a supporting character, Inigo Montoya (played by the wonderful Mandy Patinkin), was on a quest for revenge against a six-fingered man who had killed his father. Inigo spent years perfecting his sword skills, as well as crafting the perfect yet brief speech for his nemesis.

While certain characters from film, such as Boba Fett, might be considered a threat to the public safety (and who want to be seated next to Jar Jar Binks on a six hour flight?) Inigo Montoya, who eventually exacted revenge on the man who killed his father, is really not a danger to anyone.

Obviously, this flight was captained by the Dread Pilot Roberts.

(Thanks to Eric Klein and John Ordover.)