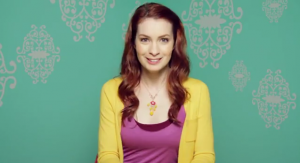 Felicia Day, the actress who turned her gaming addiction into a web series, The Guild, has parlayed her popularity into her own YouTube channel. Geek & Sundry launches today, with something for every geeky desire.

The series in Geek & Sundry include:

– “Table Top,” where Day’s male counterpart, Wil Wheaton, plays host to a board game session. “Table Top” captures what we love about board games: crushing our enemies while having a laugh. We also learn some game mechanics for their first game Small World, which is nice.

– “Dark Horse Motion Comics.” Geek & Sundry starts their motion comics series with The Secret, a 2007 comic by Mike Richardson and Jason Alexander, about high school students whose prank call to strangers (and telling them, “I know your secret”) leads to murder. Excellent presentation, but it’s not for young viewers.

– “The Flog.” Day spends ten minutes recommending whatever miscellany she likes, such as an iPhone game. She also delves into the world of blacksmithing, just because she enjoys it in the videogame, Skyrim. Awesome. If you’re charmed by Day—and I know I am—this is the show for you (and me)

There’s so much more to Geek & Sundry, and I urge you to check it out. But first, Day gives us our new geek anthem, “I’m the One That’s Cool,” starring members of The Guild. Lyrics include:

To my eight grade crush who pushed me in the pool

You may be tan and fit and rich, but you’re a tool