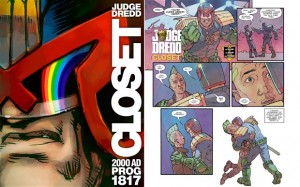 In an upcoming issue of 2000 AD–the long-running weekly British comic book that should be a part of every comic lover’s collection—we see Judge Dredd kissing a man with a green mohawk. The implication that the helmeted judge/jury/executioner of all things illegal in Mega-City One could be gay, or at least bi-curious, is enough to set comic book message boards ablaze with sadly typical homophobic ranting. But other fans are grumbling for a different reason altogether.

The fact that Dredd has any sexuality at all is completely out of character for the character.

Dredd has been an asexual character since his introduction in the second issue of 2000 AD (1977). Dredd has repeatedly chosen the law over family (to his credit, he once changed the law to help his family). I would say he has chosen the law over personal interests, but he doesn’t have any.

But all is not as it seems. According to Michael Molcher, PR Coordinator of the comic book publisher Rebellion, the person you see puckering up in Prog (a.k.a. issue) 1817 isn’t Dredd. It’s a pseudo Dredd. “The story is set in a gay fetish nightclub where people dress as Dredd. It’s actually a very touching story about a teenager coming out in the aftermath of The Day of Chaos.”

Instead of subverting our ideas about 2000 AD most well-known protagonist, this Prog seems to solidify what we already know: In a world where slabwalkers of any gender can be rented for temporary affection, Dredd ignores it all in favor of his true love, the law. And in the aftermath of the Chaos Bug, the survivors are beginning to acknowledge and embrace what is really important to them.

I’m looking forward to seeing how Dredd reacts to the gay fetish nightclub. I bet he comes down on them for impersonating a Judge, because that’s how he rolls: with the law.

(Thanks to Melissa Lee Shaw.)