Is This Poster the Reason Why ‘John Carter’ Earned Big in Russia? 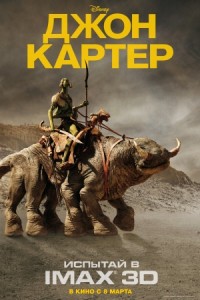 John Carter earned $100 million on its opening weekend: $30 million of it in the United States and $70 million more overseas. Russia accounted for $17 million of that, including $6.5 million earned on its opening—the biggest in its history.

So why did it do so well in Russia?

Canadian newspaper The National Post jokingly suggested that one of the reasons is because,  “The movie is a rags-to-riches story proving that merit is more important than bloodline, as Carter tries to secure peace, land and bread for his comrades.”

But I wonder if it has something to do with advertising. For example, instead of the many mediocre posters that we were subjected to here, it seems that Russia had only one poster (the larger version is below).

In it, we have the same lighting and colors as the third U.S. poster (here), leading me to believe they were created by the same designer.

But unlike the previous poster, where our hero is about to attack two White Apes with a giant chain, this poster is a quiet image. The green-skinned Martian (obviously Tars Tarkas, the leader of the Tharks) sits on his steed. We know from his weaponry that he’s a warrior, but he’s not attacking. He’s watching and waiting.

And John Carter, the title character, is nowhere to be seen.

The poster reminds me that in America, movies have to have their heroes; overseas, there’s not as much of an emphasis on heroics. I learned this for an article on book covers: art directors told me that it’s more important overseas to feature a mood or a setting than a protagonist.

Russian advertisers didn’t show us a conquering hero. Instead, they tried to evoke the idea that what we were going to see was alien.

Considering the movie is about a stranger in a strange Martian land, it worked.