Johnny Depp’s “Kolchak, the Night Stalker” Will Be Made by…Disney? 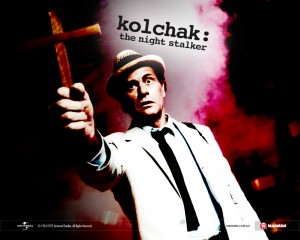 Kolchak, the Night Stalker, the short-lived 1974-5 television show that has been credited as the inspiration for The X-Files, is about to get a third life (the one after its even shorter-lived second life as a 2005 TV series). Johnny Depp’s production company, Infinitum Nihil, will be bringing the adventures of reporter Carl Kolchak to the big screen.

Depp has tapped Edgar Wright (Shaun of the Dead, Scott Pilgrim vs. the World) as the director, although currently there is no writer attached. But surprisingly, considering the subject matter—in one episode a stripper struts her stuff before geting offed—Disney will be producing.

Deadline writes, “The subject matter will be tailored to fit Disney’s family film mandate and likely a PG-13 rating.”

That might be a misstep. Those who saw Kolchak, either during the 70s or re-runs on cable, remember the show solved mysteries that included succubi, murderous Hindu spirits, and eek, eaters of bone marrow.

While Depp could do a bang-up job playing the whistling, porkpie-hat wearing, problem-solver, Kolchak without intense creepiness would be like a de-fanged vampire: not nearly as effective.

Check out a clip of the original show, here: