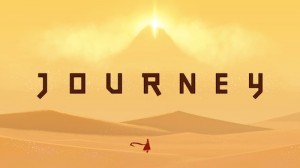 Today, the Recording Academy, presenter of the Grammy awards, revealed their nominations for the 55th annual Grammy nominations. In the category of “best score soundtrack for visual media,” The Artist and Hugo got their well-deserved yet predictable nods. And then there’s the nomination for something completely unexpected: the soundtrack to the videogame, Journey.

According to Blastr, “Other than a song featured in Civilization 4 that originated on a different album, no song specifically made for a videogame has ever been up for a Grammy.” Videogames were made eligible for the Grammy awards back in April.

Composed by Austin Wintory, who has scored the soundtracks for all three games from producer thatgamecompany (flOw, Flower, and Journey), it’s unsurprising that Journey was the first videogame to be honored for a nomination. Journey is recognizably orchestral yet spare and distanced from the dramatic surges that frequent other videogame soundtracks. Wintory also made it free from cultural clichés.

According to Wikipedia, Wintory has created three hundred scores since 2003.

Videogame music has received comparatively little recognition, although the genre is gaining ground, thanks to categories in such award ceremonies as the Spike Video Game Awards. Then there’s Square Enix Music Online, a site dedicated to videogame music, which has its own award. Previously, videogame composers previously received sporadic awards for their musical accomplishments,  (including three awards MTV from 2004-2006 and one award from the BAFTA Games Awards in 2006).

This lack of recognition has long been a mystery to videogame fans, who have known for many years that videogames frequently have wonderful soundtracks, as memorable and evocative as any classical composition. (See this wonderful article by Erik Kain for several examples.)

Wintory will be going head-to-head against not only The Artist (Ludovic Bource) and Hugo (Howard Shore), but also The Dark Knight Rises (Hans Zimmer) and The Adventures of Tintin (John Williams).

Check out the trailer for the music, below: