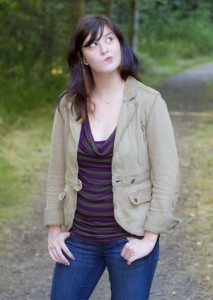 This is a triumph: Kim Swift, one of the creators of the puzzle game magnum opus, Portal, has given us a new videogame, Quantum Conundrum (QC), which was released on Steam on June 21, 2012 (and will be hitting the PS3 on July 10, 2012 and the Xbox on July 11, 2012). But rather than her previous home at Valve, where Swift worked on award-winning titles Half-Life 2: Episodes One and Two, Left 4 Dead 1 and 2, and Portal 2, QC is released under the auspice of Airtight Games.

Swift discusses her new game, the strange places her handwriting has shown up, and why gamers should purchase QC right now.

How similar is QC to Portal? How different?

I was the lead designer on Portal, and I really enjoyed making that type of game. So when I came over to Airtight Games, I pitched an idea for a game in that same kind of puzzle genre, and we went ahead and made it. But to me, that’s where the similarities end.

The game controls [are] completely different. You’re not controlling portals, you’re controlling the entire environments, and you’re given the ability to change different dimensions on the fly. Each one of the dimensions you gain access to in the game become another tool in your arsenal for solving different puzzles and challenges.

Portal and Portal 2 were actually very dark in places. Will QC be as dark?

Overall, our sense of humor is not quite as dark as those games. Quantum Conundrum is a little more pun-centric. (We love our puns.) We’re definitely more upbeat and lighthearted. We do have some aspects of dark humor. For instance, if you die during the course of the game–you play a 10 to 12 year old child, we don’t actually tell you exactly what his age is–we have these screens that will pop up and tell you things that you will have missed because you are ten and you’ve just died. They’re very darkly funny.

Professor Quadwrangle has books laying around his manor, books with some very funny titles, such as “The Call of the Wild Binomial” (with an image of binomial distribution on the cover). Who came up with these?

Our concept artist, Chris Madden, spearheaded this campaign. We sent around an email, and over the course of the week we compiled over 50 book titles based on famous existing books. As you’re playing through the game, pick up books. They’ll all pretty much be different.

This doesn’t lend itself to a catch phrase, such as “The cake is a lie.” Will there be something the fans can take away like they did in Portal?

Keep in mind this is something we never intended when we made Portal. We were a bunch of kids, and we were joking around as far as “The cake is a lie” goes. The drawings in Portal were actually me scribbling that stuff…. I had a funny moment when I realized that someone gotten “The cake is a lie” tattooed on themselves. It was really interesting to see my handwriting tattooed on another human being. That…that’s odd.