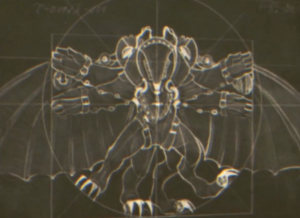 Two weeks ago, we saw a trailer for BioShock Infinite called “Columbia: A Modern Day Icarus?” With its 1970s mysteries-of-the-unknown documentary style, that trailer was pure Dharma Initiative. Irrational Games is going deeper into the lore of the Dharm—um, the city of Columbia with “Part 2.” But instead of a focus on the city, this trailer takes a good look at one of the game’s antagonists, Songbird.

Although there’s some fun in this trailer–a child’s song rendered serious by the narrator, some snippets from the game—I didn’t love it as I had loved the previous one. That’s because it was too full of exposition; BioShock games, after all, are games of exploration. This one hands you information about Songbird, albeit given in the form of questions.

Awesomely, it also gives us what could be a good look at Songbird…in the form of a drawing. A creepy, creepy drawing that looks like Leonardo Da Vinci had penciled Cthulhu.