Latest ‘Prometheus’ Viral Video: Be Careful What You Wish For 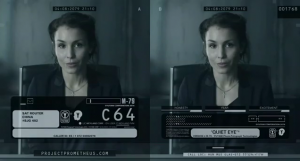 When Prometheus arrives in theaters June 8 (June 1 in the UK), fans will have been driven to a fever pitch. I know this, because I’m one of those fans, and I’m already frothing at the mouth. This latest video, which the producers have dubbed “Quiet Eye,” has made me want to reach into June with both hands and pull it forward.

This video is difficult to describe: Dr. Elizabeth Shaw leaves a message for Peter Weyland (the head of the Weyland Corporation), telling him the reasons for contacting him. She believes she has evidence of humanity’s origins, and she needs his help to uncover that evidence. As she beautifully puts,

I have doctorates in paleontology, archeology, human mythology, and [unclear word: mathematics? Mimetics?]. This is not who I am. It’s simply what I know. I make the distinction, sir, because there’s a difference to what a scientist knows and what they believe. That difference is proof.

Meanwhile, as the clip plays out, we see Shaw’s face scanned for evidence of honesty, anxiety, and malintent. Her face is also placed next to others for comparison.

The video instantly unsettling. Even though Shaw has left a simple video message, she doesn’t realize just how much information about her Weyland now has captured…down to her dental records.

Obviously, Shaw’s plea worked, and she wound up on the space ship Prometheus. And from the frightening trailers, it looks as if our heroine may regret ever sending this transmission.

Check it out in full screen view for the best effect. And don’t say I didn’t warn you—about the creepiness of the video as well as the intense excitement of the upcoming film.