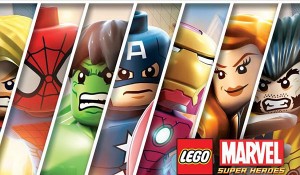 A few months ago, Traveller’s Tales released LEGO Batman 2: DC Superheroes, a wonderful addition to the LEGO videogame series. DC Comics fans loved it for the ability to play through Gotham as Batman, Superman, and forty-eight other DC Comics heroes and villains. Marvel Comics fans, on the other hand, stared piteously at their consoles and mourned their lack of Wolverine. Mourn no longer. LEGO Marvel Super Heroes will be hitting your screen some time in Fall 2013.

According to a Warner Bros. Interactive Entertainment press release,

“LEGO Marvel Super Heroes offers an original storyline in which Nick Fury calls upon Iron Man, the Hulk, Thor, Spider-Man, Wolverine and other heroes spanning the Marvel Universe to save Earth from such threats as the vengeance of Loki and the hunger of Galactus…. There are currently eight iconic scenes from the X-Men, Iron Man and Spider-Man franchises available and more construction sets tied to the new Iron Man 3 feature film will launch later this spring.”

Players can unlock more than one hundred characters from the Marvel Universe. So if LEGO will again be providing their fabulous co-op mode, we can have all sorts of crossover fun. An Emma Frost/Loki team-up, anyone?

As with most LEGO video games, you can play LEGO Marvel Super Heroes on the PS3, Xbox, Nintendo DS/3DS, PlayStation Vita, Wii U, and Windows. (The next LEGO videogame, LEGO City Undercover, will be released some time in Q1 2013 and will only be available on the Wii U and the Nintendo 3DS.)

There’s a lot of potential awesome here, like an Iron Man 3 level. Does this mean there will be levels from the X-Men and Spider-Man movies? Or will all non-Iron Man content be unique?

And is it just me, or does anyone else think that a Northstar and Captain America co-op game is a funny, funny idea?