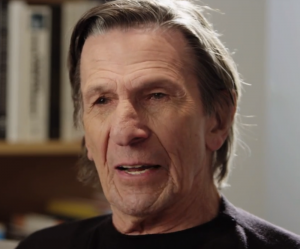 Leonard Nimoy didn’t know why the creators of the recent Star Trek-based Audi commercial had asked him to sing a few bars of his hilariously campy song from 1967, “The Ballad of Bilbo Baggins.” “I said, if you want me to do it, I’ll do it. I don’t know why it’s in the spot.” Nimoy, who created the role of Spock in the 1967-1969 series Star Trek, told me in a telephone interview that the response to the song “was a complete surprise to me.”

Nimoy’s internet presence is solid, but it’s a fraction of that of his colleagues, William Shatner and George Takei. He runs a “Spock-oriented, Star Trek-oriented merchandise” store called Shop LLAP (shorthand for “Live Long and Prosper”) with his granddaughter. “She said in order to build a customer base you have to get on Twitter. I am on Twitter, and I have several hundred thousand followers. Every once in a while I say something about what’s available on the shop, and she does some business. And that’s the extent of my web activity.”

In other words, we fans knew something that Nimoy did not: “The Ballad of Bilbo Baggins” was a quiet internet sensation. It never tore up YouTube the way the Audi video did, but after several years, it’s earned 3 million hits. In it, Nimoy sings about the Hobbit character while several dancers dance around him, well, groovily.

When asked about the origin of the Bilbo video, Nimoy explained, “I was doing some recordings in the late ’60s, and the producer was a wonderful man who became a friend, who has since passed away. His name was Charles Grean, and he came to me with this idea, and I thought, ‘Why not? It was crazy, it was funny, it was charming. Let’s do it.’ And that’s the way it happened.”

Singing that song in the Audi commercial is a shout-out to the deepest of deeply geeky fans, and it made us laugh. But for Nimoy, “It just seemed so out of context and so strange. I didn’t know many people knew about it or cared about it.” But he’s read some of the comments on YouTube, and “The response has been wonderful.”

The Audi video has had 5.5 million hits in two weeks…which begs the question: Why did the German-based company choose to market their Audi S7 to Star Trek fans?

Andrew Lipman, general manager of Communications at Audi of America, wrote in an email, “Audi viewed this video as an entertaining and creative platform to further connect with fans…. For Audi, the most important component was to make a compelling video that truly resonated with audiences in culturally relevant way.”

That doesn’t quite answer my question. When further queried as to why they were targeting the geek demographic, Audi declined to be drawn on this specifically.

There’s a reason for this: Star Trek fans tend to be older and more affluent than fans of other geek subcultures. In a 2010 survey by anthropologist Paul Frazetti, the 41-50 age range had the most fans (34%); the majority of fans (32% of respondents) earned over $50,000.

Unsurprisingly, this matches the demographics of Audi buyers. Scott Keogh, head of marketing at Audi, said in an NPR interview, their customers have “an average age of somewhere around 47 or 48 [years old].”

The reboot of Star Trek is appealing to young fans as well. The second largest number of respondents in the Frazetti survey, 21%, are between the ages of 21-30. As it happens, Audi‘s younger customer base has been increasing as well. According to business analysts R.L. Polk and Co., “Audi‘s share of the young luxury demographic has almost doubled” from 6.7% in 2007 to 11.24% in 2012.

That, and the marketing opportunity surrounding the release of Star Trek Into Darkness, are likely the reason that Audi wanted both Nimoy and his younger Spock counterpart, Quinto, the participate in this video. But what compelled Nimoy to agree to poke fun at his image?

Nimoy said, “They sent me the script, and I laughed when I read it. I’m not particularly known for comedy, but I do enjoy doing it. Also, Zachary Quinto is a wonderful actor and a dear friend, and I just thought it would be fun to do, which it turned out to be.”

Really? “It was the success of Star Wars that launched the Star Trek movies, and here we are coming to a full circle with a J.J. Abrams connection. It would be a thrill to have something to do with the Star Wars movie.”

And what’s next for Audi? Hopefully creating another fabulous video for their upcoming 2014 SQ5.