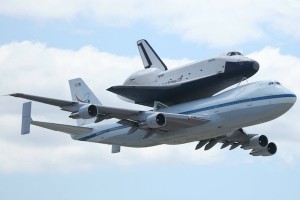 Today the Space Shuttle Enterprise arrived in New York City today, thanks to a lift from a Boeing 747. The Intrepid Museum, its future resting place, held a small welcome ceremony for several hundred guests, who included Leonard Nimoy and Senator Charles Schumer.

“This is a reunion for me,” Nimoy said during a ceremony after Enterprise‘s touchdown. “Thirty-five years ago, I met the Enterprise for the first time.”

“When this ship was first built, it was named Constitution,” Nimoy said. “‘Star Trek’ fans can be very persuasive. They sent a lot of letters to President Gerald Ford and the president logically decided that the ship should be named after our spaceship Enterprise.”

Discovery will be on display at the National Air & Space Museum in Washington, D.C.; Atlantis will be housed at the Kennedy Space Center in Merritt Island, Florida; and Endeavour will go to the California Science Center in Los Angeles, California.

The Shuttle will sit in a hangar at JFK Airport, Queens, until June 4th, where it will depart for a two-day barge trip toward the Intrepid Museum in Manhattan. After it arrives on June 6th, the museum will build the shuttle its own pavilion. The pavilion will be open to the public on July 19th.

The Enterprise was built as a demonstrator Shuttle, designed for glide tests and not capable of spaceflight. It also lacked a heat shield and therefore could not withstand re-entry into the atmosphere.

Now that the Shuttle program is over, it’s time to look forward to the next era of space travel and transportation, where, unlike its shuttle namesake, private enterprise really does go to space.